It came from a story idea by Rick King, it was turned into a screenplay by W. Peter Iliff, it was directed by Kathryn Bigelow, and it starred Patrick Swayze and Keanu Reeves, with sterling support from Lori Petty, Gary Busey, and John C. McGinley. It threaded together a plot that featured undercover FBI work, surfing, skydiving, masks depicting ex-presidents of America, and the best ever foot chase committed to film. And Point Break became one of the best action movies of the early '90s. Tonally, everyone involved judges this just right, and you can take comfort in the fact that this pretty much holds up as well today as it did when you first saw it. Even that bit referenced in Hot Fuzz when Keanu Reeves shoots his gun up in the air and goes "aaahhhhhh".

Reeves is Johnny Utah, the new guy at an L.A. branch of the FBI. The area has seen a number of bank robberies over the past few years, really professional work by people who have barely left one clue at any crime scenes, which leads to Utah being sent undercover. Because one potential theory, thought up by Agent Pappas (Gary Busey), considers the notion that the robbers are a group of surfers. Utah soon finds his way in to the surfing scene via Tyler (Lori Petty), which gets him close to Bodhi (Swayze) and his buddies. They're a good bunch of thrill-seekers, but would they ever think of robbing banks?

There’s so much to like about Point Break in pretty much every main sequence, even when you are just wallowing in the action movie tropes that crop up. The story is enjoyably ridiculous, and famously reworked to start a certain car-filled franchise, and the action beats remain slick and impressive. Bigelow often feels like a bit of a “get out of jail free” card when people are asked to make one female director they like, especially as she made so many films that seem steeped in testosterone, but she has the reputation that she has because she absolutely deserves it. And Point Break shows her excelling once again, and delivering a bit of a modern classic.

Reeves is excellent, physically capable in the role of Johnny Utah, while still wet enough behind the ears to complicate the situation when he finds himself making a whole bunch of new friends he could end up having to arrest. Swayze gives another one of his star turns from this period, once again playing someone trying to live by a certain code of ethics as things get tougher and tougher, although his character eventually becomes much more morally flexible. Petty may be stuck with the “potential love interest” role, but she does well, and is allowed some interesting little moments throughout. Busey is as gregarious as ever, and John C. McGinley is the stereotypical angry boss, a role that fits him well. There’s also a very small role for Tom Sizemore, playing another undercover agent, that means he was involved with two of the best action thrillers of the nineties.

The script may be more brie than brilliance, but that is part of the charm. Point Break delivers everything you expect from this kind of film, and then some, but it has a mix of earnestness and humour that helps to keep it near the very top of the action movie tree. And it is one that is arguably just as influential as some of the other action movies from the ‘80s and ‘90s. 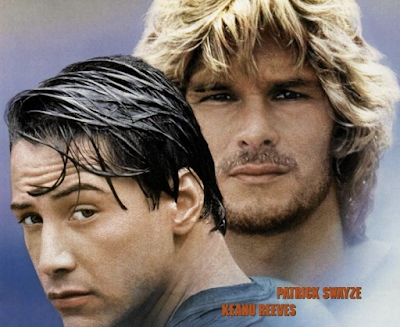