There are a couple of things to bear in mind here, as my review for Censor unfolds. First, I never aim to be contrarian just for the sake of it. Second, something can still be original even as it brings to mind numerous other movies. Oh, and one more thing, this current nostalgic glow for the "video nasties" era is already overstaying its welcome, although I suspect I am in the minority with that viewpoint.

Censor is the story of Enid Baines (played by Niamh Algar), a woman working at the board of censors during the 1980s, the height of the moral panic over video content suddenly being available to most households. She struggles with every decision that she makes, battling against people who want their films uncensored, and also struggles with the weight of her sister's disappearance many years ago. During a time that sees her harangued by the public for some of her decisions, Enid views a film that contains an actress she suspects may actually be the key to unlocking exactly what happened to her sister. But maybe she is seeing what she wants to see, or maybe she is being affected by the material she watches every day at her work.

An admittedly fantastic feature debut from director Prano Bailey-Bond, who also co-wrote the screenplay with Anthony Fletcher, Censor manages to thread together a number of thought-provoking and unsettling scenes set against a background that will still feel fresh (sore?) to many horror movie fans. It's easy to romanticise that time - every horror fan of a certain age will have at least one tale of the time they were able to source a supply of fine "under the counter" nasties - but it's better to look back on it with the disdain and disgust it deserves. People were facing huge fines and jail time. Because of movies. And many of those movies are very easily available now, many of them uncut. The censors were enemies, viewing many adults with a horribly patronising attitude (covered by a sentiment of "won't someone please think of the children"), and maybe one or two stories could still be told with that focus. Censor doesn't want to do that.

What you have here is a mix of The Canal, Evil Ed, and Berberian Sound Studio. Those are good movies to want to emulate. Even Evil Ed. The aesthetics of the film feel spot on, and there are some nice touches that lend authenticity to an experience that feels admirably like a video cassette you've just put into a shiny new top-loader machine. What you don't have is a perfect and unique modern classic. Although nicely put together, and there are a number of impressive scenes throughout, Censor never really stretches itself any further than it needs to. Bailey-Bond does great work on the atmosphere throughout, but squanders the opportunity to present viewers with something smarter and fresher.

Algar is excellent in the lead role, very quiet and reserved until she starts to become more affected by everything going on in her mind. A number of other cast members do decent work, but none make a stronger impression than the excellent Michael Smiley, giving another of his enjoyably unsettling performances (a manner that is just too familiar, a smile that stays a bit too long). Clare Holman and Andrew Havill are excellent as concerned parents, and Felicity Montagu is very good in her small role, but Censor is more of a mood piece than an actor's showcase.

I really liked this, despite what you may think from reading what I have just written above. I didn't love it though, and I'm a bit surprised by just how much love it has been receiving recently. It's surprisingly straightforward and predictable, uses the VHS witch-hunt as little more than background noise to a plot that ultimately could be viewed as saying that the BBFC and others were correct to try to "ban this sick filth", and often feels more like an exercise in style than the more interesting, visceral, psychological horror that it could have been. 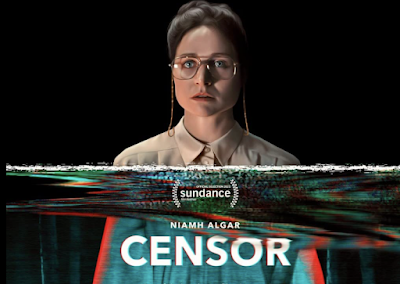