Chloë Grace Moretz stars as a young WWII pilot, named Maude, who "hitches a lift" on a B-17 with a male crew who don't appreciate her presence. She has a bag full of top secret documents, meaning the men have no choice, but it's not long until she is placed in a turret, away from everyone else. As Maude tries to work against the misogyny and mistrust of the men, things are soon complicated. There are some enemy planes nearby that shouldn't be. And there's also the appearance of a gremlin.

I was excited about Shadow In The Cloud ever since I first heard about it. It's a brilliant idea, a simple one that has the potential for so much fun. Unfortunately, not much of that fun is apparent in a film that gets far too silly far too quickly, and also feels horribly cheap for almost every minute of the runtime.

With a script, by Max Landis, apparently heavily re-written by director Roseanne Liang (after the well-documented allegations against Landis), it's astounding to think how bad this was at the first draft stage, The characters are paper-thin, in a way that damages the film by making it impossible to really care for anyone, the few action beats are implausible and unexciting, and the plot developments are absolutely ridiculous. It's insulting to viewers how badly put together this is. Easy enough to forgive if it was a TV show episode (which is worth noting, as it feels at times very close to an enjoyable episode of "Amazing Stories" that had the same setting), but a horrible endurance test in feature form. It's as if the script is some out-of-date milk that has been spilt on a sunny day and you're forced to sit in the same room with it as a hot sun shines through the windows and makes everything worse and worse.

I can't really fault Moretz though, who does the best job of anyone here. She's not doing anywhere near her best work, but she isn't bad at being a strong lead to root for. That's more down to her being Moretz than the script, however, and nobody else has that advantage. Byron Coll, Callan Mulvey, Taylor John Smith, Beulah Koale, and Nick Robinson make up most of the main airmen, but I couldn't have namechecked any of them just now without the use of IMDb. They don't get any moments to separate themselves from one another, simply being put out by the presence of a woman on their plane, and when the third act allows Moretz to interact with them at closer range it's just too little too late.

I've already seen comments from others who enjoyed this, people who appreciated that it was simply a fun viewing experience for them, so I cannot say that my view is in any way the majority one. You may like it, you may hate it. You're unlikely to love it though. As soon as the end credits ended, I couldn't help but think of everything that was wrong with it. And the more I thought about it, the more I found wrong. Even a small cartoon that kicked things off by explaining what gremlins are. I enjoyed that while it was on. Then I started wondering why they felt the need to include it, considering viewers would either a) know what a gremlin is, or b) simply be informed by the script that a creature was on the plane and trying to damage it. Maybe it was to pad out the runtime, which is at least only 83 minutes. I guess that could have been my review in a more succinct style - terrible, but not overlong. 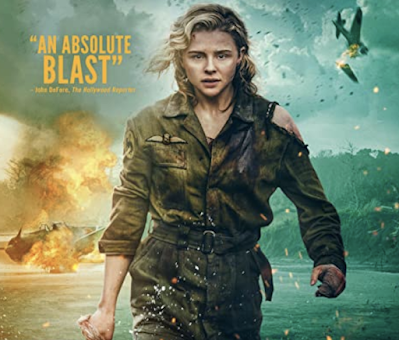