Sometimes you want comfort food. Sometimes you want that fast food burger that you know isn't going to keep you satisfied until dinner time, but it will hit the spot for that moment of fleeting pleasure. And that's the way my mind works when I settle on a film like The Dead Pit, especially as I pass over so many other, potentially better, options.

This is not a good film. It's quite ridiculous, with a script and main characters that are laughable for almost every minute of the runtime. But it hit the spot.

Danny Gochnauer plays Dr. Colin Ramzi, the kind of "mad scientist" who likes to use patients in his own crazy experiments. Appalled by discovering this, Dr. Gerald Swan (Jeremy Slate) shoots his colleague and then closes up the basement that housed both Ramzi and the patients that he'd experimented on. This all happens just on the way to the main title popping up. Twenty years later, a "Jane Doe" (Cheryl Lawson) with amnesia arrives at the facility that saw such horrors. Jane senses something in the basement, and her presence seems to trigger a series of events that will lead to the dead rising, and many more deaths. Can she stop the evil Dr. Ramzi? Perhaps another patient, Christian Meyers (played by Stephen Gregory Foster), will be able to help her.

Directed by Brett Leonard, who has a filmography full of fun genre flicks (and would direct The Lawnmower Man as his next feature a few years after this), The Dead Pit just wants to get to scenes that show undead creatures killing off people who can't believe what is going on. The gore moments build up during the second half, culminating in a fun and visceral third act, but everything else is lacklustre, at best, or unintentionally comedic, thanks to the script co-written by Leonard and Gimel Everett (who worked with Leonard on a few of his features, including that contentious The Lawnmower Man script).

Lawson gamely endures the kind of role that many horror movie actresses were stuck with in the 1980s (well, not JUST in the 1980s, but other decades seem to provide at least a bit more range of opportunities). She is asked to look puzzled for a lot of scenes, and her wardrobe options are often limited to very small items of clothing that show off her physique. She has to deliver her share of bad lines, but at least she can remain thankful that the worst of the dialogue was given to either Slate or Foster, the latter getting to utter the fantastic "for dead people, they sure are smart" line. Geha Getz also has to deliver some enjoyably atrocious material, playing a character named Sister Clair who is a standard harbinger of doom until she also proves quite useful just in time for the final moments.

Nobody should tell you that this is actually a good film, there are so many other horror movies that you'd probably enjoy more, but it's a reasonably fun time while it's on. Which may just make it the fast food burger that you fancy one day. 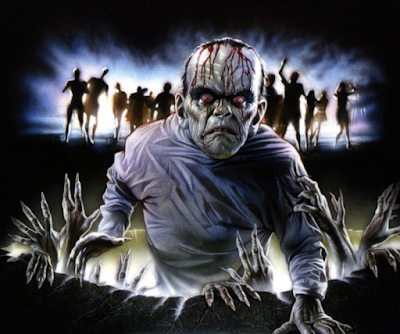