There are a few different ways to do a horror anthology movie. Okay, there are two main ways. First, have a decent wraparound for a number of tales that you want to present together in a feature. Second, have the tales interweave with both each other and the framing device. Bad Candy aims for the latter, but in such a half-hearted manner that it feels like a lazy attempt to improve a film that needed a lot more work done to it.

Corey Taylor plays a DJ named Chilly Billy. Along with his assistant, Paul (Zach Galligan), he wants to hear about, and relate, some classic scary stories on Halloween night. Not things that are obviously complete fiction, but things that "happened to a friend of a friend of mine". He gets enough tales to fill some airtime, but there might also be something else heading towards the radio station. Something that could provide the material for a whole new tale.

Co-written and co-directed by Scott B. Hansen and Desiree Connell (with a story credit for Thacker Hoffman), this is a film that feels as if it is made by people inexperienced in the writing and directing of feature films. That's true, to a degree. Although one has a larger filmography than the other, a lot of work has been spent on other formats, or in other departments.

Aside from Taylor and Galligan, who both do just fine in their roles (Taylor being the better of the two in his DJ mode, surprisingly), the other cast members who stand out are Kevin Wayne, playing a nasty stepfather, and Haley Leary, a morgue attendant who gets a bit carried away one night, leading to the best punchline in the whole film.

The big problem here is that nothing feels properly thought out or cared for. A recurring character is an evil clown figure, which is someone wearing a familiar clown mask that we've seen many times before. He has no personality, no real sense that he's the one deserving to punish others for their wrongdoings, so all you have is someone wandering around being more annoying than scary. None of the morality tales feel quite right either, with the characters not given enough decent writing to get viewers even remotely on their side, or just interested in the tale that is unfolding, before events start hurtling towards a grisly end that often feels a bit like overkill. Then there's the whole last section, the sequence which has some of the story elements crashing into the framing device. It may work on a basic level, but it doesn't work as a satisfying end to the entire film.

I have to grudgingly admit that this is far from the worst horror anthology I have seen, but it's also far from the best. Not one moment here hasn't already been done better in some other movie, which makes it feel more redundant than most. And the atmosphere was much MUCH better in both Tales Of Halloween and Trick 'r' Treat. So watch either of those instead. 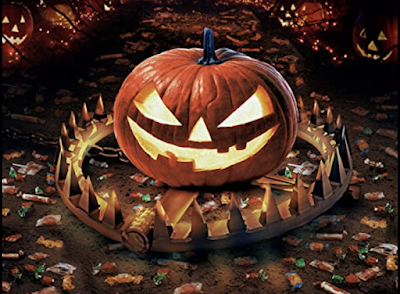