Springboarding from a famous tale written by John Wyndham, "The Midwich Cuckoos", which was subsequently adapted into an excellent film, Village Of The Damned (remade with disappointing results by John Carpenter in the mid-1990s), School Of The Damned is a bizarre British horror movie. One main reason for the strangeness of the final result is the mishandling of the tone, something that might be blamed equally on the rather inexperienced duo of director Peter Vincent (making his feature debut here), and writer Philip Dyas (who now has three films to his credit).

James Groom is the Mr. Middleton, the newest teacher to arrive at Herbert West Grammar School. He soon realises that one young man, Georgie (Max Mistry), is a bit of a trouble-maker, but he doesn't know that some of the other pupils have a way of bringing everyone into line, or punishing them for their misbehaviour. The main youngster to be wary of is Sarah (Amelie Willis), often working in tandem with her sister, Jemima (Sophie Willis).

Although I am *spoiler* not going to give this a very high rating (it just never even does well enough to be classed as average), it's a film that I'm not going to get to angry about. The acting may be wildly varying in quality, the script may be weaker than the tea my gran used to occasionally make from the second use of the teabag, and the deaths are disappointingly unentertaining, but at least it's a film that feels as if those involved were trying to make something. They don't succeed, but you can see pieces put in place for what could have been a much better film than the one we got.

As mentioned above, the big problem is the tone. Transplanting the essence of the classic tale to modern times should have given the writer and director the confidence to change more, either updating the ways in which the kids could cause harm with their power (e.g. mobile phones, internet, etc) or highlighting the comedic aspect of adults being so worried about affecting the children in their care. None of that happens, although there are a couple of moments that show both Vincent and Dyas were clearly trying to lace the material with humour.

Mistry isn't too bad, playing the kind of bully who would have been given a decent backstory in Grange Hill, and Groom benefits from being the way in which viewers get to find their way into the movie world, but there's nobody else to single out for praise. On the plus side, as I am feeling charitable, I am not going to single anybody out for criticism either. I could, but I won't.

According to the trivia on IMDb for this movie, the script was written within two weeks and it was shot in 8 days in a school populated by students, with some of them appearing in the film. Seeing the film, with its lack of any decent style or polish, and the sore lack of wit, that's not hard to believe. Perhaps those behind the camera should fight to get some more prep and shooting time on their next project. It surely couldn't hurt. 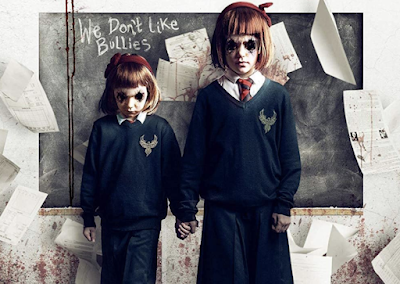