Intense lighting in every shot, hidden wind machines blowing about the hair of the lead actors, Kiefer Sutherland floating through tree branches, Flatliners may have been released in 1990 but it is so ‘80s that it’s almost hilarious at times.

Sutherland plays a med student who comes up with a bizarre plan. He thinks that science can be advanced if you can spend some time exploring the world of death and then return to the world of the living. He enlists the help of others (Kevin Bacon, Julia Roberts, William Baldwin, and Oliver Platt) in his quest to play god. People take their turn on the table, being killed and then brought back to life. But they don’t come back alone. Sins from their past cling to them like a rain-sodden jacket.

Director Joel Schumacher takes a decent idea and makes it a fun star vehicle for some hot properties. That’s absolutely fine, and there are also some light scares dotted throughout, but it’s not a film anyone should seek out if they’re after proper tension and scares. This is a gateway flick, I guess, a teen horror with very little bloodshed and only one character ever feeling in proper danger. And for those of a certain age, it has that glow of nostalgia.

Peter Filardi doesn’t do a bad job with his first feature screenplay, despite the obvious relative restrictions of having some big star power involved. Everyone has a quick and easy “hook” (be it Baldwin’s character videotaping his sexual trysts, or the others carrying around deep-rooted guilt for actions, or inaction), and the main morality lesson at the heart of it, aside from the dangers of playing god, is a solid one.

Baldwin aside, because he is arguably the blandest of the Baldwins, the central cast here are fine company. Sutherland happily goes over the top, far too cocky from the very beginning and very shaken up by the most dangerous of the “visions” that the main characters have. Bacon and Roberts are wavering needles on a moral compass, and work well, although there’s no chemistry in the scenes between them that are supposed to show them growing a bit closer together. And then there is Oliver Platt, an actor who elevates everything that he works on. He is his usual excellent self here, commenting on the situation as a witness who hasn’t been on the same journey as the other characters. Joshua Rudoy is an entertainingly vicious spirit, dressed in a red coat that inevitably brings to mind an older horror movie many consider a masterpiece, and Kimberly Scott has a nice moment, playing an older version of a young girl who was horribly bullied by one of our leads.

None of the sets look like anything other than cool movie sets, the score by James Newton Howard seems designed to underline every scare and attempts at emotion, and Schumacher moves his stars through the story like, well, stars being moved through a story, as opposed to fleshed out fictional characters, but none of these things really matter. If anything, they make Flatliners as enjoyable as it is. The sense of every main scene being so obviously staged, the feeling of stars being selected to turn up and be stars, the stranger highs and lows of the journey, it’s all a strangely cosy way to put together a slick chiller. And it guarantees that the film itself never actually flatlines. 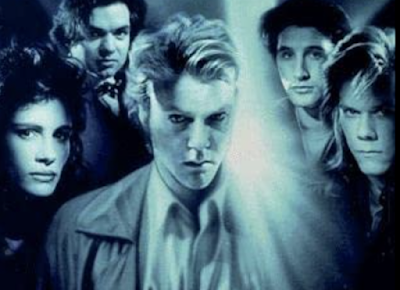