If you want a slick and enjoyable mainstream horror movie then you're probably best staying away from Boo! It's not as if it's a terrible movie, not really, but it so consistently mishandles the material (and the central plot hinges on an idea that could have been used well) that it only really works well as a shining example of how not to present a horror movie. This is one to watch when you're feeling a bit jaded and needing a reminder of why so many people watch and enjoy the content from Blumhouse and people like James Wan.

The main storyline is simple. A family receive a "boo" on their doorstep. It's something that apparently should be passed along, otherwise those receiving it are stuck with a curse, but they don't. The father instead decides to burn the piece of paper that has a rhyme written on it. This leads to every family member having visions relating to their greatest fears, and it develops and widens cracks in their relationships, adding more and more tension until things reach an inevitably damaging conclusion.

The fictional feature debut from director Luke Jaden (who has a filmography that includes a documentary and a number of shorts), Boo! shows someone who knows what they're supposed to be doing, but just somehow can't quite get anything right. The script, co-written by Jaden and Diane Michelle, isn't terrible, certainly not compared to the many worse horror movies out there, but the execution is either flat or a bit muddled. It doesn't help that things really start with the arrival of the curse, without letting viewers see some of the underlying issues within the family unit that will be exploited throughout the rest of the movie. Okay, maybe that's a script issue, but it otherwise does an okay job, unsupported by the film-making techniques that feel as if they are going through the motions.

The cast don't help. Jaden Piner and Aurora Perrineau aren't as bad as Caleb and Morgan, respectively, but Jill Marie Jones is a bit weaker, and Rob Zabrecky doesn't find the right tone for his character, a man of faith who would much prefer things if his family pretended that they never had any problems. Charley Palmer Rothwell doesn't do too bad, playing the boyfriend of Perrineau's character, but his character feels a bit wasted (again, okay, highlighting that the script has a few more flaws than I initially thought).

Despite one or two individual moments that simply focus on being enjoyably creepy, this is a Halloween movie that never really feels like it is all taking place on Halloween. It's almost as if everyone forgot the events unfold on Halloween night, which should have been an easy plus point for the film.

Not painful, not laughably bad, just really disappointing. And not worth your time. 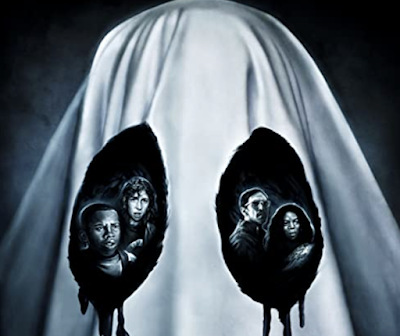