It is hard to know where to start with New Order, even in terms of discussing the plot. It all really starts with a violent attempt by the lower classes to overthrow the upper classes. But it actually all starts at a wedding, a big event where a man is reduced to begging a former employer to help him pay for hospital treatment that his daughter needs. But take a further step back, it all starts with that man being spoken to by a doctor in a busy hospital full of desperate people. Ultimately, it starts where it ends. A Mexico in disarray, with huge disparity between those with power and those without.

Writer-director Michel Franco delivers an impressively challenging work here, one that feels timely while we watch the world around us almost tear apart. There are places where people rely on food banks, and are currently trying to keep hold of a £20 top up benefit payment that has kept them alive for the past year or so. Elsewhere, rich assholes are indulging their fantasies of having a trip into space.

The cast are all good, but there are few characters who actually feel like the focus of the film. Marianne is one, and of most interest because she is one of the few shown to be in a position to help people while also having the mind to do so, and Cristian and Daniel have different attitudes to the unfolding anarchy. These characters are played, respectively, by Naian González Norvind, Fernando Cautle, and Diego Boneta. All three do good work, but Norvind is the real heart of the film, showing the contradictions and hypocrisies of the order as it was and as it changes.

It may take a sharp shock to upset the status quo, but Franco knows that any attempted revolutions can be usurped and twisted by those wanting to wrestle power into their own hands for more than just monetary gain. This is the most important point being made in the film. Radical change is good, but it is vital to make that change without leaving any space for opportunists to work with.

Perhaps unsatisfying in the second half, as it becomes harder to find any one person to root for as things continue to come undone in a society verging closer and closer to irreversible chaos, New Order tries to be as invigorating as it is unsettling. That is how I viewed it anyway, a rallying cry for a new order (obviously) accompanied by a strong word of caution. Maybe not  emphasising “better the devil you know”, but certainly reminding viewers that we’re all often stuck in different sections of Hell and the best we can usually do is turn the thermometer down for a while.

If you have enjoyed this, or any other, review on the blog then do consider the following ways to show your appreciation. A subscription/follow costs nothing.
It also costs nothing to like/subscribe to the YouTube channel attached to the podcast I am part of https://www.youtube.com/channel/UCErkxBO0xds5qd_rhjFgDmA
Or you may have a couple of quid to throw at me, in Ko-fi form - https://ko-fi.com/kevinmatthews 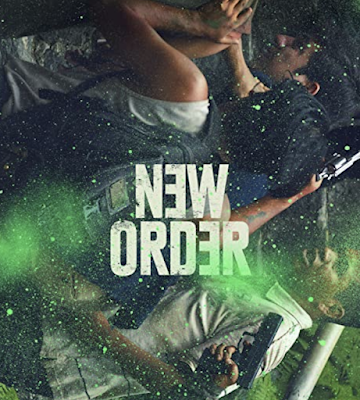