Lowe is Ruth, a heavily pregnant woman who has recently lost her partner. The details of her partner's death are unclear, although it's implied that there was an incident involving a number of other people on some climbing trip. And those other people must die. Because baby says so. Which means, in between dealing with a midwife she cannot be bothered making small talk with (played by Jo Hartley), Ruth heads out and about to kill the people seen as responsible for her widowed state. Some of them don't seem like bad people (e.g. an instructor named Tom, played by Kayvan Novak). Some of them do (e.g. the horrible DJ Dan, played by Tom Davis). But should any of them be blamed for what could have been a tragic accident?

Lowe is on great form here, and she never really disappoints. Deciding to make your feature directorial debut is one thing, doing it while heavily pregnant is another. Somehow managing to maintain the energy levels required for a very (impressively) quick film shoot, she takes all of the various emotions that can accompany any pregnancy and layers them with both horror and comedy trimmings. This isn't a pregnant woman who smiles as she is complemented on her glow, it's a woman gritting her teeth as she builds up a cloud of rage on her way to committing murder, while also trying not to wet herself or spontaneously lactate.

The simple shooting style might be in line with what you'd expect from a quick, and relatively cheap, little black comedy, but there's a lot here that marks Lowe out as equally talented behind the camera. The sharp script seems almost a given, but her shot choices and editing (with cinematography by Ryan Eddleston and editing by Matteo Bini) show someone not willing to remain confined in what we might consider the standard "Brit-flick" look. There's also a very enjoyable score accompanying the visuals.

The actors already mentioned do great work, but there are also fantastic turns from Kate Dickie, Mike Wozniak, Tom Meeten, and Gemma Whelan, although nobody given any screentime lets the side down. It's Lowe who is the star though, and with good reason. Not only does she deliver every wonderful line of dialogue so well, she really conveys the mental state of a woman who knows her mental state is broken, but is constantly trying to decide if she wants to fix it or just go with the flow. If Prevenge is basically a slasher movie (and it is . . . the template is used well, especially with the tragedy that motivates our killer) then Lowe allows Ruth to become one of the few slashers that you end up rooting for, most of the time.

With a great mix of laughs and nastiness, an intriguing central concept and execution reminiscent of early Cronenberg, and perfect performances from all involved, this proves to be well worth all of the hard labour involved.

Yes, I ended with THAT pun. 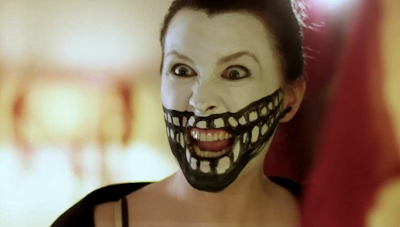