If there's one film that epitomised all of the worst decisions made by people remaking horror movies in the '90s and start of the 21st century, it's The Haunting. This is a film that I remember being bad, but revisiting it showed me just how much I had managed to block out of my memory in the two decades since I last gave it a watch.

Liam Neeson plays Dr. David Marrow, a man wanting to conduct an experiment in the effects of fear. But he doesn't want any of his subjects to know that, which is why he advertises for people to take part in an experiment on sleeping problems. He gains access to a large house, and a trio of characters played by Catherine Zeta-Jones (Theo), Owen Wilson (Luke), and Lili Taylor (Nell). Nell is the most timid of the three, but she also seems to be the one that the house takes the most interest in. Because the house definitely has a heartbeat within it, a spirit, and an agenda. Or is that just how Nell is viewing things?

The first screenplay written by David Self, working from the source material by Shirley Jackson, it's obvious from very early on that this is a film intending to be very different from the original. The focus is on the CGI used here, and the movie plays out as if nobody involved is even aware of the original (with its superb way of creating atmosphere and tension without showing too much, and sometimes not showing anything at all).

Despite Self's wobbly script, however, the blame seems to lie more squarely on the shoulders of director Jan de Bont (a man who went into a serious downward slide after such a great directorial debut, Speed). The Haunting has some nice camerawork, and the production design looks gorgeous when it's not being marred by the CGI, but nothing else to recommend it. Even the central performances are disappointing.

Neeson is at his blandest, Zeta-Jones is almost comically "in heat", or so it seems in some scenes, and Owen Wilson is someone I enjoy seeing onscreen, but fits a couple of other genres much more comfortably than he fits horror. Then we have Taylor, who is often good, yet she also struggles with the fact that her character is tense and hyper-neurotic from almost her very first scene. It's a performance without any real nuance, and again seems to come from the direction of the film.

You should never automatically dismiss a remake. We've had some interesting films over the past few decades that have shown how remakes don't have to be a complete failure, and nor do they have to be slavishly copying the original film. You should dismiss The Haunting though. It's not one of those films that is underserving of its reputation. If anything, it's worse than some people remember. The Jerry Goldsmith score is quite nice, as is a lot of the production design. The rest can be consigned to the wastebin of history. 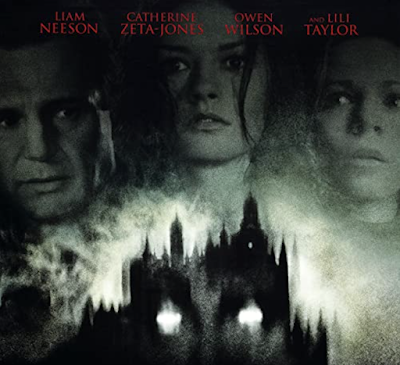