There are far too few movies based on the excellent novels of James Herbert, who gave us The Rats trilogy, The Fog (not the same story as the John Carpenter movie), The Magic Cottage, Creed, and many others. From what I can recall, movie-wise, we’ve had a film that just happened to be about killer rats and the nice-but-dull Haunted. So I was very excited when I discovered that The Unholy is a film based on Shrine, a Herbert novel I read many years ago. It’s not exactly a great movie, but it is easily the best adaptation of Herbert’s work so far.

Jeffrey Dean Morgan plays Gerry Fenn, a newspaper reporter who has ruined his reputation by fabricating a story. So he ends up taking on the smaller jobs, the thankless jobs, for lower rates or pay. That is how he ends up in a small town trying to make a decent story around a marked cow. He then almost hits young Alice (Cricket Brown) with his car. Alice speaks, despite the fact that she hasn’t spoken before. Gerry senses there may be something to explore, and then he ends up with the chance to present what could be the biggest story of his career. Alice is seeing the vision of a spirit. And miracles are happening. As Gerry investigates things further, however, he discovers that the spirit may not be what it claims to be.

Written and directed by Evan Spiliotopoulos, The Unholy is a solid story marred by the addition of some CGI and jump scares. It manages to deliver some excellent moments though, making use of a decent cast to tell a story that unfolds in a genuinely interesting, albeit slightly predictable, way. The destination may be obvious, but the journey of the flawed main character is better than that shown in many other mainstream horror movies.

Morgan is on good form in the lead role, his obvious charm no longer working on people who were “burned” by his past behaviour. He conveys determination and insight when he is finally moved to go back to doing his job properly, and he’s easy enough to like even when he’s acting like a bit of a lowlife in the first few scenes. Brown is a believable innocent caught up in some very strange events, she does well alongside both Morgan and William Sadler, the latter playing a caring priest who views the miraculous with caution, knowing that evil can use good to get a foothold within the minds and souls of unsuspecting victims. Cary Elwes and Diogo Morgado turn up to make the most of the opportunity to increase the numbers of a potential global congregation. And Katie Aselton is absolutely fine as a local woman who starts to help Morgan, after an initial meeting that doesn’t endear him to her (of course), and plays an important role in helping piece everything together in time for the grand finale.

Although I have complained here about some CGI and jump scares, I should clarify that it’s not all something to hold against the film. The effects are generally pretty well done, it would just have been better to see more practical work at times, and a couple of the jump scares are executed well enough to make them worthwhile. But the best thing here is the story, a journey for a central character that allows him a chance to truly face up to his past, and indeed even use his sullied reputation in a way that could end up saving lives. Everything at least feels as if it was put together by people really wanting to present audiences with something entertaining that doesn’t overstay its welcome. They succeeded, even if this may be destined to be forgotten a few months from now. 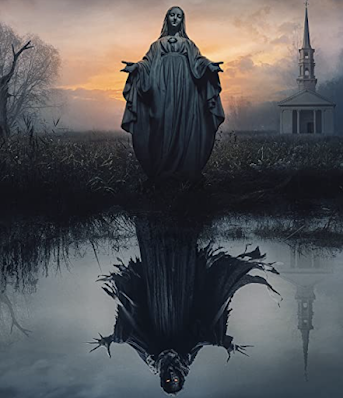