With that title, the central concept (a killer hair weave), and the cool company environment that is the main setting for the film, you'd be forgiven for thinking that Bad Hair is basically another film just like Slaxx. Thankfully, that isn't the case. Not that I disliked Slaxx, not at all, but I just wanted another unique film that didn't feel too similar to anything else around. Bad Hair delivered.

Our main character is Anna (Elle Lorraine), a black woman working at a company that essentially feels like the BET version of MTV. It's an image-conscious place, and Anna is encouraged to change her image. That leads to her getting a new hair weave, which she soon starts to realise can control her as it kills people around her. And there's a chance that her boss, Zora (Vanessa Williams), has the same problem.

Written and directed by Justin Simien, Bad Hair takes what could be a ridiculous concept and uses it to make a number of interesting points. Once you've sat through this, there's a lot more to discuss than you could have anticipated. And I'll circle back to a couple of those points after mentioning the main cast members.

Lorraine is excellent in the main role, as timid and downtrodden as any other character I can think of from the past few years before growing in confidence and power, ultimately being dragged into situations by her hair until she tries to figure out how to change things. Williams is used well for her role, a bit more in line with her work on Ugly Betty than her other movie roles. Jay Pharoah, Usher, and Steve Zissis play three very different male characters, all doing well with what they're given, and James Van Der Beek makes an appearance that feels slightly incongruous until he reappears just before the end credits roll. Elsewhere, there are roles, big and small, for Lena Waithe, Judith Scott, Ashley Blaine Featherston, Kelly Rowland, and Laverne Cox, with everyone playing things nicely straight, kind of, in between the moments of fearsome follicle foul play.

Now to those points being made in a movie about a killer weave. As the movie started, I realised that this was an interesting way to explore something that, as is so often the case, affects women a lot more than it affects men. I'm not going to be silly and claim that no woman wants to be caught on a "bad hair day", but any hair problems can definitely throw the life of a woman into turmoil, particularly anything that stays there as a permanent problem. Just look at the shock some people still experience when they see any bald woman. This is enough to make Bad Hair more interesting than it otherwise might be, but it also layers in a commentary on the pervasive control of those who get a new weave on their head (which provides a way of controlling many African American women in a way that allows a dangerous plantation owner to essentially maintain a number of unwilling slaves).

Despite the comedy inherent here, Bad Hair is a fairly straightforward horror, and one that manages to do what so many of the best horrors do so well, provide a metaphor for some aspect of our society that we would rather glimpse in a mirror than look at straight on. It’s definitely worth a watch, and has potential for a sequel that goes further and gets even wilder. 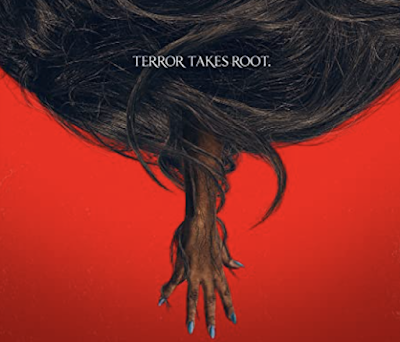