This is on me. Totally. I saw the trailer for this and allowed myself to start feeling optimistic. It looked like an enjoyable horror movie with the emphasis on scares and a spooky atmosphere. That ended up not being the case. What we have is something on a par with a few other horror movies from recent years, a bit of a throwback that doesn't do enough to refresh or twist the tired material.

Suki Waterhouse plays Camille Meadows, a young woman who arrives at the Fairfield Academy. Her arrival comes not long after the death of a student, a death apparently caused by a ritual not a million miles away from the whole "Bloody Mary" thing that many people are familiar with. Quickly making enemies with a particular clique, Camille soon discovers that Fairfield Academy may have a ghost or two wandering the rooms, and someone may want her to reveal what really happened to cause their death.

Written and directed by Simon Barrett, who has previously directed a segment or two for the V/H/S series (and has written some great films, such as You're Next and The Guest, and the oft-forgotten Dead Birds), this is a film that very deliberately chooses to go in one particular direction in the third act, and that direction didn't feel like the right choice for me. That's a real shame, particularly when one or two moments in the first 2/3 of the movie are enjoyably spooky and hinting at a much better movie (the same movie that the trailer seemed to be selling).

Waterhouse isn't a very good lead, although she's not helped by the way her character is written, and none of the other main cast members do enough to stand out. Madisen Beaty, Inanna Sarkis, Ella-Rae Smith, Stephanie Sy, Djouliet Amara, Jade MIchael, and Seamus Patterson are all getting name-checked here because of their screentime, but I'd say that only Sy and Smith come close to making a decent impression, portraying two very different characters that at least don't feel as interchangeable as everyone else in the main group.

I suspect a lot of people will like this much more than I did. It's technically very well done, and I appreciate the fact that Barrett isn't afraid to make use of things like flickering lights and ghostly figures glimpsed ever so briefly alongside some of those flickers, but it feels like Barrett started the film with one approach in mind and then began to doubt himself. He should have had a bit more faith in his own ability to use, and revel in, the ghostly aspect of his plot. Somewhat paradoxically, something so old-fashioned and "creaky" feels fresher and more enjoyable than the familiar third act, which basically turns into a bit of a Scooby-Doo ending (without the fun).

It's not a terrible viewing experience, and does enough in between the dull moments to just about make up for those dull moments, but it's disappointing. Very disappointing. Although it would have been less disappointing if it had been released about twenty years ago, when most of the big supernatural films released went for the same kind of ending. 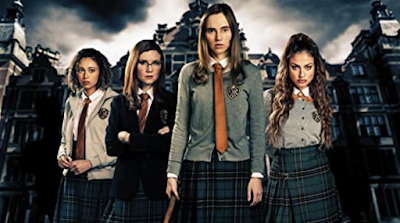