Ludlow is a small town, but it has been plagued with mysterious deaths and tragedies over the years. Celebrations are happening though, and the town has been gifted a piano. Yayyyyy. But it's a haunted piano. Booooo. It's the kind of piano that can tinkle its own keys when wanting to create some extra spookiness, and that seems to spur on spirits who want to do things like . . . move fireside pokers around behind people. The spirits also kill, when the budget and plotting allows it. Debra (Stephanie Cushna) is a reporter digging around for a story on the town, as she used to live there until moving away at the age of 9, and Paul Bentzen is a local preacher who seems to sense that something is turning rotten in the middle of the planned festivities.

Directed by (the notorious) Bill Rebane, a man who certainly never let things like a lack of funds, or decent actors, stop him from getting a film made, The Demons Of Ludlow is, much like one of his other movies, The Giant Spider Invasion, a terrible horror movie that I cannot stop having a soft spot for. I recognise both as being genuinely terrible films, and the rose-tinted glasses don't filter out the sheer awfulness of them, but they also make me smile, both for what is onscreen and how I fell for them when I was a young boy. The Giant Spider Invasion is a film I enjoyed on a small TV screen, being impressed by the terrible special effects and scared by the spiders, and The Demons Of Ludlow was one of the first videotapes I bought for myself after being lured in by a lurid cover that promised so much more than the film delivered.

Rebane is working from a poor script, written by William Arthur (with Alan Ross credited for additional dialogue), but he does nothing to help himself, or any of his actors. Viewers get to see people with bad make-up on their faces portraying spirits, they get to see wires on any household objects being moved about by invisible entities, and they get to see a lot of bad acting. The special effects aren't very special, the piano keys play ominously when things are about to get spookier (well . . . supposedly spookier), and a number of scenes feel very sluggish, making this feel like it runs for much longer than the 90-ish-minute runtime.

Cushna isn't too bad in her role, and C. Dave Davis is certainly decent value as the Mayor, but the other cast members range from the average to the godawful. Bentzen is at the latter end of that scale, his particular style harder to overlook when he is in so many scenes.

I wouldn't recommend this film to anyone, unless you're looking to torture someone for an evening. Yet I have now watched it myself three times. Why? There are so many other movies I have still to watch for the first time. But I owned this on VHS, and gave up on it the first time I tried to watch it as a teenager, then owned it in a cheap DVD pack. Now, because of the strange and interesting times we live in, I now own this on Blu-ray. I'll probably watch it again one day, and I'll definitely look forward to diving into the special features. Meanwhile, I advise most sane people to stay far away from it. 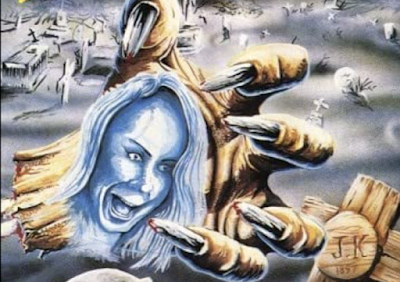