The easiest way to describe Uncanny Annie is as a horror riff on Jumanji, an idea that has been used a few times now, with varying results.

A group of friends get together to play some board games during the spooky season, one year on from the death of one of their number. They find a game called Uncanny Annie and start to play, thinking it will be very easy. It won’t be easy though. Not at all. Because the game features a mischievous and deadly spirit, Annie, who always wants to win.

Although feature length, and screened a couple of years ago at a horror film festival (maybe more than one, I’m not sure), Uncanny Annie is actually the first episode of the second season of Into The Dark, a horror anthology TV show. This explains why the opportunity to direct is given to Paul Davis, while the writing is handed over to Alan Blake Bachelor and James Bachelor. These people have very limited experience in the movie world, going by their filmographies, but this format allows them to stretch their legs and work within a premise that may well provide the best mix of restrictions and freedom.

Adelaide Kane, Georgie Flores, and Paige McGhee play the three main female leads, and all of them do just fine with what they’re given, which asks them to quickly react believably to a situation that quickly turns from the slightly unusual to the absolutely insane. There are also some male characters, but the only one standing out is played by Jacques Colimon. The males seem to be set up as the ones destined to be killed off quicker, setting things up for at least one young woman to face off against Annie. And speaking of Annie, that role goes to Karlisha Hurley, who is hampered by the script mishandling her character. Annie actually feels like the most extraneous character, and the film could have been improved by not feeling the need to personify the evil spirit of the game.

Passable enough, even if it lacks any major scares or decent kills, this comes closer to making the most of the central idea than some other movies that have tried it. It still doesn’t do enough though, and is hampered by Annie herself. There are a couple of sequences that stand out from the rest of the film, and it seems like most of the game rules are followed quite well, but the whole thing could have been more fun, or made more tense, by some important tweaks to characters and the group dynamic.

You might end up enjoying this more than I did, although I suspect most people will think I was too generous (as usual). Either way, you could do worse than taking a roll of the dice on this one when lining up a selection of horror movie viewings. 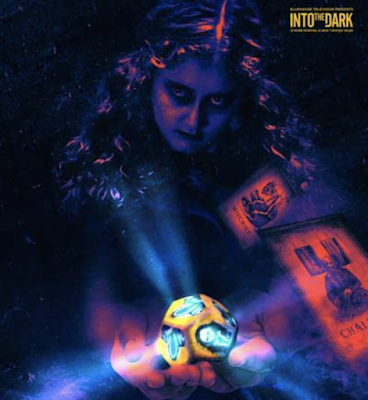