Cash On Demand is one of those movies SO good that I can't believe I had never even heard of it before it was recommended to me just the other week. It's a Hammer film starring Peter Cushing but it's a million miles away from their more famous, blood-filled horrors although Cushing is as impeccably brilliant as ever.

The legendary leading man stars as Harry Fordyce, a rather demanding, displeased and suspicious bank manager. The staff know that there will be no fun while he's in the branch. Things are especially tough for Pearson (Richard Vernon), who can't seem to do anything right at all in the eyes of his boss. It's only a few days before Christmas, however, so maybe Mr. Fordyce will be in a better mood.
No chance.
He's as critical and mistrustful as ever and his mood isn't made any better by the arrival of Colonel Gore Hepburn (Andre Morell), a man who has been sent by the higher echelons of the bank to evaluate and test security measures. Or has he? It soon becomes clear that Hepburn is testing the bank security in an altogether different manner.

Based on a play by Jacques Gillies, Cash On Demand remains as fresh and enjoyable today as it was when first released 50 years ago. David T. Chantler and Lewis Greifer do a good job with the script (though I am assuming that they were able to keep a lot of the source material intact due to the fact that the movie takes place all in one location) and Quentin Lawrence directs competently enough but it's the acting that makes this such a compelling slice of fine entertainment.

People may be sick of me going on and on about what a fan of Peter Cushing I am but he's such a consistently flawless actor that I can't help wanting anyone and everyone to feel the same way. He is absolutely wonderful in the role of Harry Fordyce, a character with an icy facade that rarely cracks. Richard Vernon is equally excellent as the quiet and dignified Pearson while Andre Morell gets to have all of the fun as the charming Colonel Hepburn.

Successfully mixing a number of elements, Cash On Demand is a wonderful morality tale, it's a decent little Christmas movie, it's a superb character study and it's a classic heist film. It's a new favourite of mine and I hope at least one person reads this review and then seeks it out. If that happens then I will be delighted. 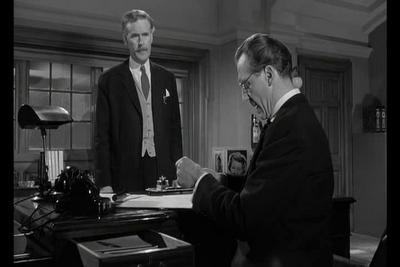