It may be someone new (Mark Rosman) in the director's chair for this TV movie sequel to the TV movie original but with Rich Burns returning for the writing duties and three of the main cast members returning, this mildly entertaining sequel feels like a brief meeting and cup of mulled wine with old friends. Not your best friends, mind you, but people that you don't rush to throw out of your house until an hour or two has passed by.

Tom Kavanagh is still Nick Snowden AKA Santa Claus and Ashley Williams is still Sandy Brooks but this time around the movie starts with them together, living quite a happy life among the snow and the reindeer. Well, there's the little matter of Nick being so busy with Christmas stuff that he forgets to have any Tinsel-tastic time with the lady in his life but, overall, things are fine. That changes after an argument that ends with Nick travelling through his magic mirror and then getting a knock on the head, making him lose his memory. Sandy has to find him and make him remember who he is but it's not that easy - he has to realise and believe in himself so that the magic of the holiday remains. And, hopefully, he can realise before the dastardly Buck Seger (Patrick Fabian once more) manages to exploit the situation and get his revenge for what happened during the first time that they met.

Although there are some new challenges facing the main characters, this is pretty much a re-run of the first movie. Fabian is still the nominal villain of the piece, young Alexander Conti plays a smartass kid this time around and there's an additional kindly old man (Hal Williams) who has always known about the real magic of Christmas.

The other factor that's just the same this time around is the likeability of the leads. Kavanagh is good, Williams is a little ray of sunshine (or a little star on the Christmas tree or whatever appropriate analogy works best) and Fabian is fun when he's involved in the antics. Conti and Williams don't really add much but the script doesn't treat them all that well so it's not really their fault.

Many people might not even rate this as average but I do, I think it's a standard puff piece lifted up by the three main stars and I might even watch it again one day. It's unlikely but I might. 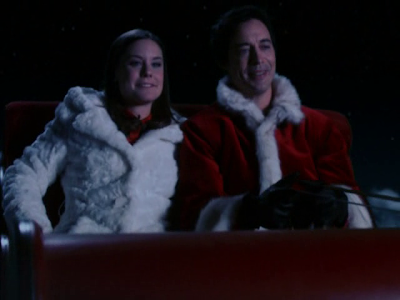