Jenny McCarthy plays Mary Class, a high-flying business executive, in this Christmas TV movie that starts off pretty dull and then quickly slides downhill from there. She's a busy, busy lady but is forced to take some time out during the holiday season when her father takes ill and she is required to help run the family business. Oh, and her father (George Wendt) happens to be Santa Claus.

I can't bring myself to rate Santa Baby highly, I can't even give it an average score because it's just too unexciting and unfunny for the entire runtime, but I can't bring myself to really "put the boot in" either. It's a little TV movie that tries to be mildly distracting fun and I'm sure that there are at least one or two undemanding viewers who will enjoy this when it's shown on TV during the Yuletide season. It's inoffensive and somehow caters for almost all sections of the viewing demographic. Kids will like the elves, the parents won't mind McCarthy and co. in most of their scenes and the grandparents will like the element of traditional values. There are also some sweet moments to please couples while single folks can enjoy the whole way in which McCarthy has to stand up to her partner Grant (Tobias Mehler) to assert her independence and protect the Claus way of life. Men get to watch the not unattractive Jenny McCarthy while women can wait for scenes that include the handsome Ivan Sergei.

Director Ron Underwood is seemingly happy to go along with the flat script by Garrett Frawley and Brian Turner, as are all of the actors. McCarthy is a world away from the loud, sassy gal she used to be and it's a shame that she doesn't get to at least once remind people of the ballsy woman she used to be. George Wendt turns up and wears the Santa suit, which is really all he's required to do. Ivan Sergei is nice enough in his nice man role while Tobias Mehler has to play the nominal villain of the piece. Poor Michael Moriarty is given a couple of scenes and doesn't even have the good grace to look embarrassed while he's given the most cringeworthy and ridiculous moment in the whole film. Kandyse McClure fares quite a bit better thanks to the double whammy of her not being well-known at all (at least, not to me) and also playing the most sympathetic character of the lot - the poor assistant dragged into the middle of the Christmas madness.

If this comes on TV at some point over the holidays then you may find yourself leaving it on and you may even smile once or twice but you won't laugh and you won't ever rush to rewatch it. It's not a good film, it's just so irritatingly inoffensive that I can't really bring myself to completely trash it. To think that they made a sequel. And to think that, so help me, I'll be watching that sequel very soon, obsessive completist that I am. 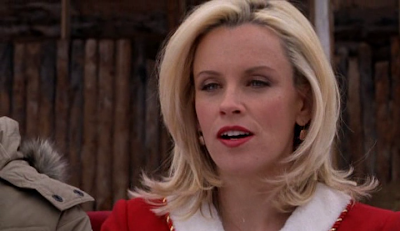