A bonus short for today because you can never have enough Christmas spirit.

Treevenge is a wonderfully demented short from Jason Eisener (who is now best known for directing the wonderfully demented Hobo With A Shotgun). It's all about the horror of being a tree at Christmas and shows everything from the point of view of the scared, tortured trees. That's all there is to it.

The cast aren't really all that important here because the focus is very much on the trees. Viewers are even treated to subtitles, showing just what the trees are thinking/saying as they get uprooted, chopped down in size and forced into a stand that then has screws tightened to hold them in place.

It may be only approx. 16 minutes in length but Treevenge is very much a short film of two halves. The first half shows how nasty we humans are to trees at the most wonderful time of the year and the second half shows the outright carnage of the revenge (hence the title). While the first half is full of some nice little observations and great gags, the second half lets rip with bloodshed and gore and does so in spectacular style. Eyes are poked out, limbs are removed and even babies are severely harmed.

It's like the best kind of Troma film nicely compacted into one near-perfect short. The fact that it's very rough around the edges just adds to the appeal (as do the soundtrack cues from classic Euro-horrors of yesteryear) but the most admirable thing is probably how polished it all is despite that roughness, something that Eisener would nail perfectly in Hobo With A Shotgun.

I have nothing else to say, this is just a bonus, short review for a short film that every horror fan should watch at least once. It makes for a fine appetiser before the likes of Santa's Slay or Silent Night or even Bad Santa.

Treevenge is available to watch for free on YouTube here - http://www.youtube.com/watch?v=kicdSI_-XpE - and I'm not sure if it's actually available on DVD attached to any other feature. If you watch it and enjoy it then do at least consider buying the excellent Hobo With A Shotgun so that Jason Eisener keeps getting money and keeps getting to make movies. 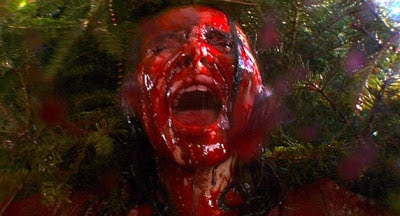