Dirty Dancing eh, if you don't know it then you certainly know OF it. Even if you only know that "nobody puts Baby in the corner". The successful stage show adaptation of the movie is playing at the Edinburgh Playhouse from Tuesday 4th December 2012 - Saturday 12 January 2013 and it proves to be the very definition of a crowd-pleaser.

The story is exactly the same as it was in the movie. A young woman, Frances 'Baby' Houseman (played here by the lovely Jill Winternitz), spends a summer vacation with her parents (played by James Coombes and Julia Nagle) and sister (Emilia Williams) and comes of age while enjoying the company of the staff there, and especially the main male dancer, Johnny (played by Paul-Michael Jones).

Directed for the stage by Sarah Tipple and with Eleanor Bergstein adapting her own movie screenplay, Dirty Dancing can't fail with fans of the film. It just can't. That's a scientific fact.

It's far from perfect though. Okay, I'm clearly not part of the main target audience (my wife enjoyed the show much more than I did and the whooping and hollering women around us were having even more fun) but I enjoyed the music, the dancing and the comedy when it was all working well. The flaws weren't major but I thought I'd list them first nonetheless and get them out of the way:
1) In an attempt to port across so much of the film (and the show seems to include every line from the movie script) the play sometimes feels too clumsy and rambling, especially with one or two transitions to scenes that last a mere minute.
2) The script isn't as sharp as it could be, which I think is down to Bergstein mistakenly thinking that her original work simply holds up as classic stuff. While the movie is a classic of its kind, and while it holds up surprisingly well, it's not a film that is chock full of great lines. I can think of two, which are used in the play, but that's it.
3) The use of the extras in crowd scenes often felt awkward and far too fake. I know that many plays/musicals can have this problem but it felt more pronounced here and, amateur outsider looking in that I am,  I can't help feeling that the staging could have been improved.
These may not seem like major problems but they do affect the whole production, especially in the first half of Act 1.

But enough of my criticism, let's look at everything that the show gets right.

First of all, the cast are pretty much all excellent. Jill Winternitz is a constant delight as Baby and does well with every aspect of the role, whether it's the comedy of her trying to learn how to put some oomph into her dancing or the grace and skill of her moves once she's mastered it all. There may be no replacing the great Patrick Swayze in the eyes of many but, let me tell you, Paul-Michael Jones does an admirable job - he's so good, and apparently so sexy, that I think at least 80% of the females in the audience became pregnant just by watching him. James Coombes and Julia Nagle are both fine and Emilia Williams is okay for Act 1 before coming into her own in Act 2 with some physical comedy that had everyone crying tears of laughter. Michael Remick was also fine as Max Kellerman, the owner of the holiday camp, while Stefan Menaul excelled in the role of Neil Kellerman - the fun, comedy role allowing him to steal a few scenes during Act 1. Nicky Griffiths plays Penny Johnson, the dancer who gets in trouble and causes the chain of events that bring Baby and Johnny closer and closer, while Callum Nicol plays Robbie Gould, the guy who causes that same trouble, and both were very good. And not forgetting Colin Charles as the laid-back Tito Suarez.

Secondly, the music. Of course the music is a winner. Remember how great the soundtrack to the movie was? Well, all of the hits are here. "Be My Baby", "Do You Love Me?", "Love Man", "Wipe Out", "Hungry Eyes" (a favourite track used during a favourite moment), "Love Is Strange" and, of course, "(I've Had) The Time Of My Life". The hits just keep on coming and the familiarity helps the energy of the whole production. I can't have been the only person tapping their feet from start to finish.

Thirdly, the staging of the show is deceptively simple but also very entertaining. Video screens are used to great effect (with an extra layer added, providing setting and comedy, during the dance practice montage that stands as the highlight of Act 1), a live band are positioned above the main players, sometimes in sight and sometimes hidden behind closed shutters, and the moving floor allows for some smooth changes of scenery and an interesting addition to some of the dance numbers.

Last, but by no means least, there's a finale that brings the house down. I admit it, I was grinning and clapping along and loving every moment of the last big number - and many of you will already know what that is. There's a great return to the stage from the swaggering Johnny, there's THAT line of dialogue and then there are the many perfected dance moves, including the one that everyone came along to see, preceded in the showing that I attended by a cheeky little loosening up of the wrist by Paul-Michael Jones (the twinkle in his eye was, undoubtedly, seen even at the very back of The Playhouse). It's a finale that makes everything else pale into insignificance and guarantees that every audience member leaves with a huge smile and an urge to try out a few dance steps.

Women should already have their tickets booked while any men being dragged along should know that it's okay to admit it if you end up enjoying yourself.

As mentioned, Dirty Dancing is playing at The Edinburgh Playhouse until Saturday 12th January 2013 - tickets are available here. 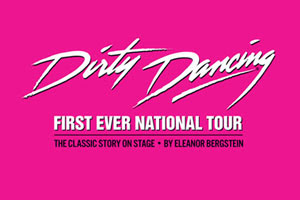