Everyone returns for this sequel to Once Upon A Christmas and, as you might expect, it's slightly inferior to the first movie but gets by thanks to familiarity with the characters and the lovely Kathy Ireland as Kristen Claus.

After the events of the first movie, Kristen has no memory of her life or who her father is. She is happy with the Morgan family but worries about knowing so little about herself. When Bill Morgan (John Dye) proposes to her it should be a joyous occasion but, instead, it reminds Kristen of her unknown history. She agrees to marry Bill on one condition, her background comes to light before the day of the wedding - Christmas day. Meanwhile, Rudolfa Claus (Mary Donnelly Haskell) is trying, once again, to usurp her father and change Christmas completely.

Tibor Takacs is the director again and Steven H. Berman is the writer so it's no surprise that the tone of the movie is exactly the same as its predecessor. It's also no surprise to find that everyone onscreen slips easily back into their uncomplicated roles. Kathy Ireland is still a welcome plus point in the lead role while John Dye, James Kirk, Kirsten Proust and Wayne Thomas Yorke are all smiling, happy and loving family members. The biggest problem here is the potential for boredom to set in as these characters had, essentially, completed a more interesting arc in the first film.

For those who enjoyed the first movie, this at least has the good grace not to move the goalposts or to try and run off in an entirely different direction. It may suffer slightly because of that but it at least goes along with consistent logic and keeps the characters true to how they were (for the most part).

A Christmas cookie sequel to a Christmas cookie first film, these aren't going to become enduring festive favourites but they're also enjoyable enough to pass the time when nobody can find the TV remote control and nobody wants to search for too long amidst the cloud of sprout-powered flatulence. I'll probably never watch these movies again but I didn't want to gouge my own eyes out with ceramic snowmen while they were on. 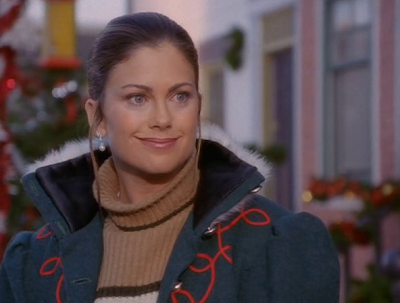