Based on the short story by James Joyce, the final tale in "Dubliners", The Dead is a handsome and well-acted movie that nevertheless just left me cold. It's also the final film to have been directed by the great John Huston (the story was adapted into screenplay form by his son, Tony).

The plot is all about a Christmas dinner being held by a couple of old spinsters (Cathleen Delany and Helena Carroll). The ladies have invited a mixture of friends and family and everyone gets a chance to make an impression on the crowd, be it with a rendition of poetry or song or a loud debate during the main meal. Two guests in particular, Gabriel and Gretta Conroy (played, respectively, by Donal McCann and Anjelica Huston), find that the evening gives them plenty to think about, cause to reflect on their lives and wonder about past events that led them to become their present selves.

I'm actually explaining the film very badly, and misrepresenting it somewhat, so I can only apologise to those who have already seen the movie and who may be wondering if I even watched the damn thing. I did watch it, I enjoyed it, but it's a very difficult film to pin down, in my opinion. It's the film equivalent of a cloud of damp mist that seems to move through your pores when you walk through it.

I'm not even sure why I didn't like it more than I did. The script was a great mix of lively chat and sombre introspection, with a couple of pieces of very beautiful poetry in there too, and the direction from Huston (who was very near the end of his life and, sadly, died before the film was released) is solid and keeps the naturalistic performances and material always watchable. The cast is pretty flawless. McCann and Huston are very good in their roles but they're more than matched by Delany, Carroll, Donal Donnelly (as the ever-so-slightly drunk Freddy Malins), Dan O'Herlihy (as the ever-so-slightly antagonistic Mr. Browne) and everyone else, including the ever-reliable Colm Meaney.

John Huston deserves a lot of praise for capping a fantastic directorial career with a movie that never reflects just how his health was failing while it was being made but I can't lie, there was something about this movie that left me unengaged. Perhaps just the beauty and the nature of the material left it all feeling slightly too artificial for me to lose myself in. Perhaps.

The Dead is certainly worth your time but whether you end up loving it or not is another matter entirely. 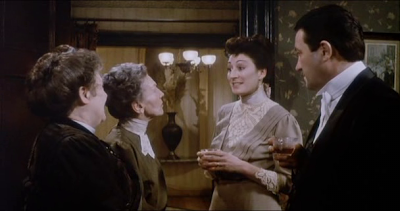