Jenny McCarthy returns as Mary Class (aka Santa's daughter) in a sequel that nobody wanted and, unbelievably, it's actually an improvement on the first film. Okay, so the first film didn't exactly set the bar high but I still went into this movie fully expecting to have to tolerate it as opposed to try and enjoy it. I can't say that I loved it but I can say that it didn't make me want to smash in my TV screen in a blind rage.

A few faces have changed onscreen (Santa Claus is now played by Paul Sorvino and Luke Jessop is now played by Dean McDermott) but the rest all remain the same and behind the camera it's still Ron Underwood directing from another script by Garrett Frawley and Brian Turner.

The story this time around is all about Santa having what can only be described as a bit of a mid-life crisis. Mary did such a good job organising Christmas the previous year that he has more free time on his hands than ever before and spends it playing in jazz bands, playing golf and just being anywhere but where he's needed most. He's left everything being overseen by the efficient Teri (Kelly Stables) but then expects Mary to step in and finish everything off in the last stretch. Mary isn't happy about this and nor is Teri, who has been working hard to gain recognition and possible promotion.

Everything just works a bit better this time around. McCarthy has some spark to her once again, helped by the fact that this film kind of pits her against the meddling character played by Stables. McDermott is an adequate replacement for Ivan Sergei in the role of Luke, here elevated from potential love interest to actual boyfriend, and Sorvino has a lot of fun as a Santa who just wants to cut out and enjoy all of his new free time. Mig Macario, Gabe Khouth and Richard Side have some fun while Jessica Parker Kennedy makes a very, very cute elf, and also has fun with her role.

It's as predictable and inoffensive as the first movie but it's just that bit more fun. The sugar and schmaltz starts to pile up in the last 15 minutes or so but it's offset ever so slightly by the preceding cheating, scheming and manipulation. 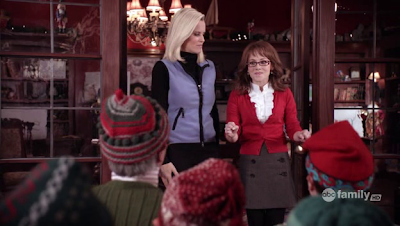