Good grief, this is a bad film.Thankfully, it's amusingly bad for most of its runtime but there are many aspects that could also cause some viewers to get angry. Like the fact that half of the film is made up of recycled footage from the first movie. Apparently, because the first movie was so reviled in certain territories and deemed to be so offensive, the producers felt that they could get away with an edited version of events being incorporated into another film that continues the Yuletide murder and mayhem. They were very, very wrong.

Eric Freeman plays Ricky Caldwell, the brother of Billy (who went on a killing spree in the first movie). As the movie begins, things are being set up to let Dr. Henry Bloom (James Newman) interview Ricky and determine his state of mind and what has caused it. Ricky soon begins to talk and spends 30-40 minutes recounting most of the events of the first movie, events he wouldn't actually know a thing about if this movie had any passing acquaintance with reality or logic. Once the film passes the halfway point, Ricky goes out into the big, wide world and starts a killing spree that would make his big brother proud.

To call Lee Harry the director of this movie is, I feel, doing a bit of an injustice to Charles E. Sellier Jr (director of the first movie). I'm sure there are sequels that recycle more footage than this one but I honestly can't think of any right now. Harry is also credited as co-writer with Joseph H. Earle and that's another exaggerated claim. All of the best bits come from the first film and the rest is like one extended joke leading to an unfunny punchline.

It doesn't help that Eric Freeman is a terrible actor. Hey, I'd love to break it to the guy more gently but I think by now (25 years after the movie was first released) he has probably received harsher criticism than anything I will throw his way. Freeman gives an eye-rolling, stilted performance that's not usually seen outside of the lowest budgeted Troma films and it weighs down a ship that was already sinking. Newman isn't all hat good as the doctor interviewing him either. I suppose I could be nice to Elizabeth Kaitan and say that she was okay but it's hard to judge anyone accurately when they're put alongside the sheer awfulness of Freeman. The same goes for Jean Miller, the actress portraying Mother Superior this time around (although, of course, Lilyan Chauvin is shown in the flashback footage).

I laughed at how bad it all was so it wasn't an experience completely devoid of fun (and many people who have already seen it will smile knowingly at the very thought of the words "garbage day") but there's no getting away from the fact that it's a dollar-chasing, lazy, clumsy and unworthy follow up to one of my favourite Christmas horrors of all time. 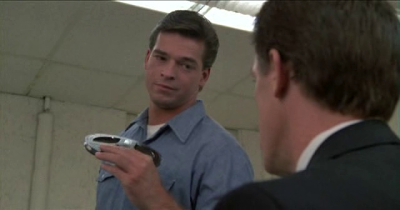