I, like many other non-Americans, have never watched Pee Wee's Playhouse. In fact, if it wasn't for Tim Burton making a movie based around the manchild played by Paul Reubens I am pretty sure that I wouldn't have a clue who Pee Wee ever was. But Burton made his movie and I found out about the character. That didn't make me immediately want to seek out the children's TV show that he used to front but over the years I kept hearing more and more about Pee Wee's Playhouse and I must admit that I became slightly intrugued. Then someone told me about this Christmas special and I knew that I had to see it.

It's so crazy and surreal that I'm not sure if I can do it justice but I'll try. I think the best thing is to describe the very basic format of the show, for the benefit of people like myself who had never before seen it. Pee Wee goes about his playhouse being very childish and playful and interacting with a number of people who stop by to see him. He also interacts with a Magic Screen, a talking bit of floor, the contents of his fridge and many other living things that shouldn't be living. If you're a UK resident of my generation then let me put it this way - try to imagine Rik from The Young Ones fronting a show for kids while wandering about the house that the gang used to share.

As it's Christmas there is a magical feeling in the air and the opportunity to get lots and lots of gifts. There are also even more visitors than usual as everyone tries to get involved with the Christmas cheer. Grace Jones is accidentally delivered to the Playhouse when she should have gone to The White House and she gets to sing and dance before having to leave, Oprah Winfrey and Whoopi Goldberg pop onscreen to quickly say hello, Little Richard can't seem to manage walking on snow and ice, Magic Johnson joins the fun, K. D. Lang sings Jingle Bell Rock, Cher makes a brief appearance and Frankie Avalon and Annette Funicello are forced to make lots and lots of Christmas cards at Pee Wee's behest.

Go back and read that paragraph again and remember that I still haven't covered everything in the show.

Reuben co-directed with Wayne Orr and co-wrote with John Paragon and he certainly gave the viewing public good reason to always remember Pee Wee. Everything about the show is slightly loony but in a good way, a way that kids will love and adults will also be able to enjoy. You might think that it's not worth considering as a seasonal viewing but, trust me, it's like eating a whole fruit loaf made of edible cracker jokes while washing it all down with mulled wine. That may not sound like a good thing but I think it is. The end result is a warm, fuzzy glow and a smile and a feeling that you've been slipped some candy-coated LSD.

But the uninitiated may first want to check it out on YouTube, where someone has kindly placed the whole thing (see it here). 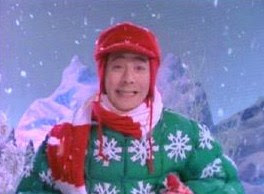