Danny DeVito and Matthew Broderick star in this disappointing Christmas comedy as two neighbours who end up upsetting each other. It's a tale of escalating rivalry that's been done a number of times before (in a number of better movies) but it suffers from having central characters that it's hard to care for and being more predictable than a Christmas cracker gag.

Broderick plays Steve Finch, an optician, a pillar of the community and an all-round good guy. Kristin Davis plays his wife and they have two normal kids, one teenage daughter (Alia Shawkat) who is unhappy while she tries to show how she's growing into a woman and one younger boy (Dylan Blue) who acts more depressed in the run up to Christmas to bag himself some better presents. Christmas is a busy time for the Finch family with a lot to do and traditions to uphold. That's all thrown into disarray by the arrival of a new neighbour, Buddy Hall (DeVito). Buddy has his lovely wife (Kristin Chenoweth) and two stylish and beautiful teenage daughters (Kelly and Sabrina Aldridge). While Steve and Buddy don't exactly hit it off right away, things start to get a lot worse when Buddy gets the idea in his head to decorate his house with enough Christmas lights to enable his house to be seen from outer space.

Written by Matt Corman, Chris Ord and Don Rhymer, Deck The Halls is almost consistently unfunny. Broderick and DeVito aren't served well at all by the script. I get the point that the characters are supposed to become blinded by their single-minded quests for their own interpretation of Christmas perfection but it's a shame that they had to be assholes for almost every scene. Luckily, the women fare much better and Kristin Davis and Kristin Chenoweth have a few good scenes together and make up for the irritation of the men. To be fair, DeVito has moments when he actually manages to do okay but Broderick never gives anything more than a very weak rehashing of his performance in Election. He was good in that movie, thanks to the obsession of his character being ever so slightly understandable, but it doesn't work this time around.

Director John Whitesell fumbles everything from start to finish. The movie should kick into gear when the two main men meet up near the start but, instead, it starts to sink down into a quagmire of its own lazy mess. The set-pieces in particular (a family photo that's interrupted, a trip to the family Christmas tree lot, an attempt by Steve to cut the supply powering the lights of his neighbour, a speed skating race) are all disappointing and end up boring the hell out of the viewer instead of raising the entertainment levels. Which makes this movie far from the top of the Christmas tree. 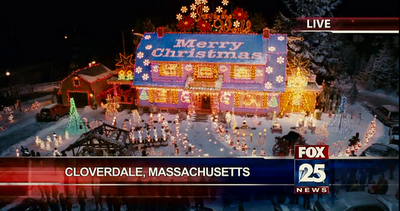