Tim Allen and Jamie Lee Curtis star as the Kranks in this enjoyable Christmas comedy from director Joe Roth that is adapted, surprisingly, from a novel by John Grisham entitled Skipping Christmas.

After waving their daughter, Blair (Julie Gonzalo), off at the airport the Kranks head home and start a new chapter in their lives. It's not long until Luther Krank has what he thinks is a brilliant idea. Instead of spending the $6000+ that they spent on Christmas last year he wants to go on a Caribbean cruise and just . . . . . skip Christmas. His wife, Nora, is tempted and agrees only after Luther promises that he'll match the main charity donations that they included in their Christmas spending the previous year. When Luther informs his colleagues of his plan to skip Christmas he is labelled a Scrooge and sense no small amount of resentment but that's nothing compared to the feelings of his neighbours, who are marshalled by do-gooder Vic Frohmeyer (Dan Aykroyd). It's not long until the Kranks have upset many of their friends, their neighbours, the Christmas tree salesman, their local priest and even a couple of police officers who raise money each year by selling their own calendar. Can the Kranks actually skip Christmas or is there no escaping the festivities?

Everything you associate with a Christmas movie is here (the tree, the decorations, the songs, the need for certain foods, the monetary cost and stress, the life lesson about the real meaning of Christmas) but it's nicely inverted for a good 2/3 of the film. The Cranks do only have themselves to blame as the pressure and pressure builds for them to join in with the fun but they also get some sympathy due to the fact that Christmas should be up to what any individual wants to make it.

Director Joe Roth keeps things moving along nicely and the script from Chris Columbus only really starts descending into his usual mawkishness during the last 10 minutes or so. Everything before then is coated with cynicism and the feeling of an ongoing war so that makes it more digestible than many other, overly sweet, Christmas movies you could take a look at.

I've been a fan of Tim Allen for a long time and he does his usual schtick here. I like it, some folks don't. If you don't like him then, obviously, you're not going to enjoy the movie as much as I did. Jamie Lee Curtis is a lot of fun as the wife struggling to keep her resolve in the face of mounting festive pressure and the supporting cast is full of many great stars: Dan Aykroyd, Austin Pendleton, M. Emmet Walsh, Elizabeth Franz, Cheech Marin, Jake Busey and even young Erik Per Sullivan (who is probably best remembered from Malcolm In The Middle).

Christmas With The Kranks is a lot of fun and does, deliberately or not, make some of the usual points about the yuletide season. It's not all about the materialism and the money spent but it's also not a time to skimp on anything that may put a smile on the faces of others. 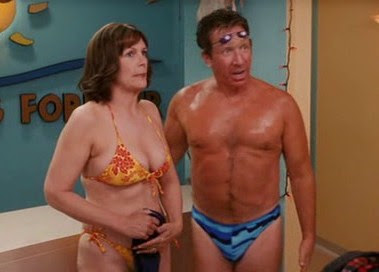