New Year's Eve is a big, bloated, all-star romance that shows how different people reach big moments in their life on . . . . . . . . New Year's Eve. Written by Katherine Fugate and directed by Garry Marshall, it's happy sappy fluff of the highest order. Originally planned as some kind of continuation from Valentine's Day (which I have yet to see), things eventually changed enough to make this a standalone film although I'm sure that the two easily make up an acceptable double-bill for those who can handle the excess sweetness.

It is, of course, New Year's Eve. One man needs to get to a certain place by midnight to reunite with a woman he has fallen in love with, one woman ends up catering for a gig and party that features her ex-boyfriend as the main entertainment, one mother is determined to keep her daughter from making any big mistakes, a pair of strangers are stranded in a broken elevator, a young man sets out to help an older woman complete a fairly expansive "to do" list, two pregnant women end up with a chance to win a cash prize depending on who has their baby first, a man lies dying in his hospital bed and one woman feels the eyes of the world watching as she tries to ensure that the Times Square ball drops at midnight.

Imagine if Love Actually had been made in America. Then imagine that it was only half as good. You then have New Year's Eve. The writing is just weak and predictable, the direction is just dull and predictable and the only good points about the film come from the few cast members who do well. Zac Efron and Michelle Pfeiffer are fun to tag along with as the former tries to help the latter get through her checklist of special experiences. And then Josh Duhamel is at least likeable in his tale, he's the one trying to reunite with the woman he loves. And . . . . . . . . . . oh no, that's all. Aside from a few cameos from the likes of Hector Elizondo, Larry Miller, Matthew Broderick, Carla Gugino and Yeardley Smith, there is nobody else to praise.

Jessica Biel and Sarah Paulson may not be terrible but they're stuck in a terrible story (they're the two pregnant women). Robert De Niro, Cary Elwes and Halle Berry go through the motions in there tale, which is ultimately pretty dull. Sarah Jessica Parker often annoys me so while she wasn't the worst offender here I still can't say that I enjoyed her performance. Hilary Swank was dull but okay, Ashton Kutcher was okay but dull, Lea Michele was dull and dull and then we get a double whammy in the storyline featuring Jon Bon Jovi and Katherine Heigl. Thankfully, Sofia Vergara is also involved in their pathetic and uninteresting part of the proceedings so she at least brings a bit of energy to the screen.

Overall, this is something that most people will be able to sit through without smashing up their TV but few will end up revisiting. Unless they start feeling particularly masochistic every New Year's Eve. 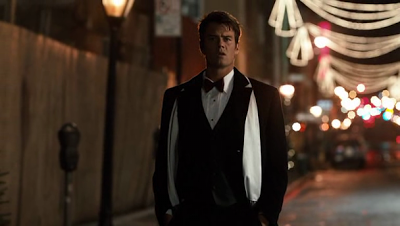