Silent Night, Zombie Night is that all too common thing, a great title lacking a great movie to accompany it. It's not a terrible film, it's just that . . . . . . . . . nope, wait, I guess it actually IS a terrible film. Yet it has some aspects that save it from being completely unwatchable.

The plot is as simple as you can get. There's a zombie outbreak. That's it. Two cops (Frank, played by Jack Forcinito, and Nash, played by Andy Hopper) are caught up in the middle of things and that at least distracts them from their argument for a while until they meet up with Frank's wife (Sarah, played by Nadine Stenovitch). You see, Frank isn't a nice guy most of the time and his wife was about to leave him. Frank suspects that she's been sleeping with Nash but that might be his imagination. Or is it?

The biggest problem with Silent Night, Zombie Night might be clear to you after reading the above plot summary. Sadly, writer-director Sean Cain undoes any of his good work by using a zombie outbreak to frame an uninteresting and melodramatic love triangle. It's as if a bunch of zombies just wandered into the middle of a series of As The World Turns.

Cain throws in some decent special effects now and again, there's a fun (though far too obvious) homage to Reservoir Dogs within the first 5-10 minutes and the rare moments when viewers are reminded that everything is happening at Christmas makes for nice juxtaposition. If only it was something that Cain remembered to keep threading throughout the movie.

Jack Forcinito acts mean and tough, Andy Hopper acts nice and tough, Nadine Stenovitch acts with the poor material that she's given, Lew Temple isn't too bad as a family man holed up in his attic after the chaotic outbreak and Vernon Wells and Felissa Rose are just about adequate, I suppose.

While this is no Zombie Nation, it's certainly no The Living Want Me Dead (available to view HERE). I could have marked this one lower, it's really too much filler and very little thriller, but it's clear that the writing and direction may be flawed but Cain tries to paper over the many cracks with his love of the horror genre. And that gets him a bonus point. 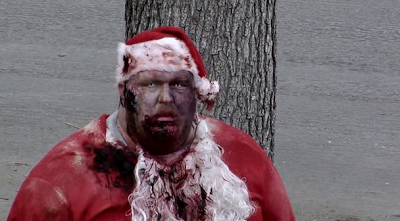