Anyone who knows me either online or in the real world will know that I'm not only a fan of the Christmas season but also a huge fan of A Christmas Carol. After years spent watching movie adaptations, I finally got around to reading the original story when I was in my mid-20s and I rate it as one of the most delightful classics ever written. The fact that there have been a number of great movie adaptations over the years pleases me immensely but the fact that some people can take such great material and still somehow screw it up really irks me. From the numerous adaptations of the story that I've seen, none have screwed it up more than this one - a shockingly bad animated film that features a largely British vocal cast (to their, and my, eternal shame).

I'm not going to reiterate the story of Ebenezer Scrooge here because everyone already knows it. Okay, I'm being horribly assumptive there but I'd wager that ALMOST everyone reading this review knows of the tale so that's good enough for me. The story is changed this time around, but only ever so slightly. The main addition to the material comes in the shape of two mice who go alongside the main characters and observe everything. There's no reason to have these mice scampering around onscreen. They're just there to appeal to kids who like cute little animals.

With a vocal cast that includes Simon Callow, who also plays Charles Dickens in a small live-action prologue, Kate Winslet, Michael Gambon, Rhys Ifans, Nicolas Cage, Jane Horrocks, Juliet Stevenson and Robert Llewellyn (who is best known to many fans of UK comedy for his role as Kryten in Red Dwarf), this had the potential to be something very enjoyable indeed. There was even a hit song included, "What If" sung beautifully by the talented Miss Winslet. Everything had the potential to be great.

Sadly, all of the failings of the movie become obvious within mere moments. Director Jimmy T. Muakami gives audiences lifeless, flat and horribly poor animation while the script (actually written by Piet Kroon and Kryten, I mean, Robert Llewellyn) is so bad that it will hurt the ears of anyone who enjoys the best lines contained within the source material.

Then we have those vocal performances. It's only Kate Winslet who appears to have put any energy and effort into her performance whatsoever. Callow is especially disappointing in a lead role that most viewers, myself included, would expect him to attack with relish and from the rest of the cast, it's only Cage and Gambon who stand out, simply because their voices are more recognisable.

This film was so bad in every conceivable way that it actually made me angry while I watched it. The only good thing I can take away from the experience is knowing that it didn't sell quite as easily as those involved surely hoped it would, performing relatively poorly at the UK box office. I would advise everyone to avoid this travesty at all costs. Even if it just happens to come on telly while you're recovering from a typically excessive Christmas meal I urge you to rouse yourself from food-induced drowsiness for just long enough to change the channel. Nobody will thank you for leaving it on. Nobody. 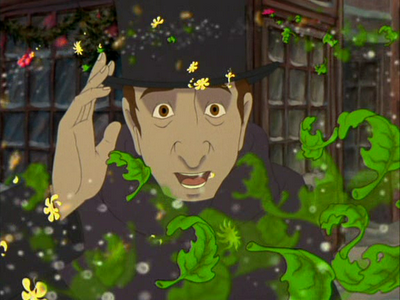