Getting home for the holidays, it's been a plot device for many, many years and can prove very successful with the right script, cast and director. Planes, Trains & Automobiles remains one of my favourite movies and is, arguably, one of the best of this particular type of movie. I'll Be Home For Christmas is one of the worst. Well, one of the worst that I've seen.

Jonathan Taylor Thomas plays a fast-talking college student named Jake who plans to spend Christmas with his girlfriend, Allie (Jessica Biel), somewhere nice and warm and away from family. Allie has other plans, however, and wants to go home for Christmas. When Jake is given an incentive by his dad (Gary Cole) - get home by the time the family sit down to dinner and he can have the Porsche - he decides that spending time with his family might not be so bad after all. Unfortunately, his journey gets off to a bad start when a few disgruntled fellow students throw a Santa suit on him, complete with glued-on hat and beard, and leave him stranded in the middle of nowhere. Jake wants to catch up with Allie, who accepts a ride from the irritating Eddie (Adam LaVorgna) after thinking that Jake has just let her down, and wants to get home in time to accept that fine car and he's prepared to do whatever it takes.

Director Arlene Sanford hits every expected beat in this "by-the-numbers" Disney movie. The script by Tom Nursall and Harris Goldberg is so bland that I imagine it being printed on beige paper. Of course, I wasn't expecting anything stellar but there are many live action Disney movies better than this one, especially when it comes to holidays (go for the wonderful The Santa Clause at Christmas and keep a copy of Hocus Pocus on standy for Halloween).

The soundtrack features a number of the usual seasonal hits and is one of the few plus points. The rest of the movie is just far too predictable and bland, from the way that Jake tries to get himself out of trouble with a police officer to the life lesson being learned en route from A to B.

This would all be more bearable, enjoyable even, if there was a decent star in the lead role but, good grief, Jonathan Taylor Thomas is just annoying for every moment that he's onscreen. I mean proper "just punch him in the face to make him go away" annoying. He's supposed to be charming and cool but that just never comes across, in my opinion. The character is just a douche, plain and simple. Adam LaVorgna's character is also a douche but he's SUPPOSED to be a douche so that's okay. Jessica Biel is as appealing as ever though it's hard to understand why she's attracted to the main character. Gary Cole isn't onscreen for long but I always like to see him in any movie so that was another bonus. The other person worth mentioning is Andrew Lauer, who provides a lot of fun with his small role as an easily distracted driver who helps Jake out and then pretends to be a helper elf in order to avoid the long arm of the law.

So the movie gets a point each for Biel, Cole, Lauer and the Christmas songs. A total of four. Yeah, that sounds about right to me. 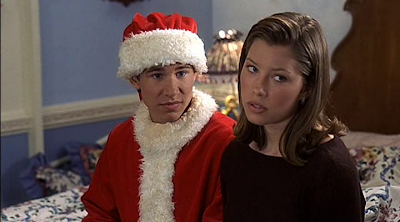