If there is anyone acting in movies lately who is more annoying than Christina Milian then I will be very, very surprised because I almost didn't make it to the end of Christmas Cupid simply because of her annoying and smug presence. She may have been easier to tolerate if the movie had been better but I doubt it.

The plot is a horribly modernised, warped version of A Christmas Carol in which successful and driven Sloane Spencer (Milian) ends up visited by the spirit of prematurely deceased starlet Caitlin Quinn (Ashley Benson, just about the only likeable presence in the movie) and warned that she needs to change her ways. Sloane has been a bad friend, a bad daughter and a bad person to fall in love with so her mistakes are to be pointed out to her by three ex-boyfriends (one from her past, one of her recent dalliances and someone from her future that she hopes she doesn't recognise). So it's kinda like a cross between Ghosts Of Girlfriends Past and Scrooged without any of the appealing elements of either, which I know may not be a lot in the case of the former film namechecked there.

The lazy screenplay by Aury Wallington is lazily directed by Gil Junger and the result is a Christmas film that actually makes you want to say "humbug", at the very least.

Where to begin with Milian? I guess to be nice about it all I could say that I prefer her singing to her acting. And I absolutely hate her singing. She's not helped by the fact that she's playing a character that viewers will struggle to root for but a better actress might have somehow made things more palatable. I've already noted that Benson is about the only likeable presence and she's good fun throughout but her performance is just too little among too much dross to make the movie much better. Chad Michael Murray needs to have a serious word with his agent because going from One Tree Hill and the House Of Wax movie to this is NOT the career path to move along. Burgess Jenkins, Ryan Sypek, Ashley Johnson, Jackee Harry and Patrick Johnson, on the other hand, were all people I'd never heard of before so if they don't move on to anything better I won't be particularly emotional about it.

But it all comes back to Milian - the biggest stench in the middle of a big cloud of . . . . . . stench. If there's any justice in the world then she won't act in any other movie ever again, leaving a role for someone else to take on. But the world is often a crappy place and isn't overflowing with justice. Exhibit A, I give you Miss Milian's career.

One to avoid unless you happen to be a teenager who just loves both Ashley Benson and Christina Milian. But if that's the case I urge you to seek at least some therapy. 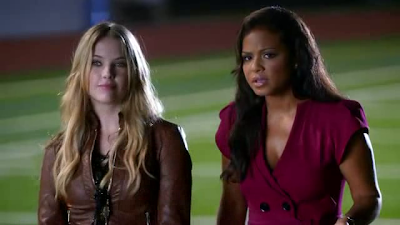