When he witnesses the murder of his parents at the hands of a vicious criminal dressed in a Santa suit, young Billy develops a perfectly acceptable fear of the avuncular giver of gifts. Growing up in an orphanage with his younger brother, Billy is further traumatised when the Mother Superior tries to force him to sit on the knee of a visiting Santa. All of the other kids think of Christmas as a happy time when gifts are received. Billy thinks of it as a time of murder and bloodshed, especially for those who have been naughty instead of nice. When he becomes a young man, Billy gets a job in a local store and does fairly well in his role. Until he has to step in to play . . . . . . . . . . . . . . . . . . Santa. Anyone on the naughty list is really going to suffer this year.

Directed by Charles E. Sellier Jr. and written by Michael Hickey (developing from the story by Paul Caimi), this movie upset a lot of people when it was first released and was dismissed as trash by people such as Sickel & Ebert and Leonard Maltin. I love it.

It's gloriously demented from start to finish, piling on the psychological damage to the main character throughout and barely pausing for anything that comes close to the reality of how killers are created. Actually, to be fair, the events shown could certainly shape someone into a killer over time but everything is heightened and taken to an extreme that keeps the focus on the entertainment rather than any rumination on damaged psyches.

Robert Brian Wilson plays the grown up Billy and he's very good in the role, all twitchy and eye-rollingly insane. Horror genre fans will be pleased by the small role for Linnea Quigley, playing a babysitter who is busy trying to be a bit naughty before Santa pays a visit, while Lilyan Chauvin and Gilmer McCormick play a couple of nuns involved in the running of the orphanage who start to put two and two together when they hear of the killer Santa on the loose. The gorgeous Tara Buckman has a small but important role and Eric Hart is great as Mr. Levitt the storekeeper.

There are many moments in the movie that are laughable but that doesn't matter, even the laughable moments are entertaining and this is one big slice of brilliant sleaze that goes all out from start to finish to entertain. In that regard, it's a success and while it won't be to everyone's taste but I absolutely love it. 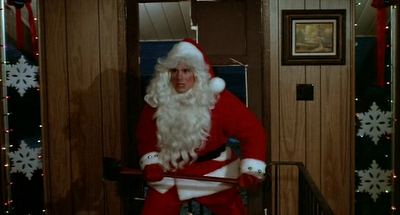