Surviving Christmas is one of those movies that has a lot going against it. It starred someone that people loved to hate (Ben Affleck), it didn't do well when it was finally released (ten months later than originally planned to avoid it clashing with Paycheck, another star vehicle for, yep, Ben Affleck) and it was shot without a completed script. That's why I was surprised that for the first half hour or so the movie was fairly enjoyable. I had a couple of laughs and I liked the premise. Then it started to pile on more "comedy" and more and more and everything began to slide and fall apart like some kind of spaghetti tower under a warm stream of water.

Affleck plays Drew Latham, one of those handsome and happy self-made millionaires that only ever exist in the movies. After a wake-up call from his girlfriend (Jennifer Morrison), he is set to spend another Christmas on his own. Not really happy about that, he instead decides to offer a family a LOT of money if they allow him to spend Christmas with them. They live in the home that he grew up in as a child so it will be a way to relive some happy memories and remember what he once loved about family and loved ones at that special time of year. Inevitably, tempers fray, secrets are revealed and there are some scenes of a farcical nature.

Let me start by praising most of the cast members here because the cast is the best thing about the film. Affleck doesn't do great so those who hate the guy onscreen won't be won over. To be fair, he's stuck in one of those comedies that works under the mistaken impression that the lead character is always funnier if he's louder and more energetic than everyone else. That's not the case. Please stop thinking that it is. The rest of the cast, however, fare a bit better. James Gandolfini, in particular, is great as the grouchy head of the family trying to grit his teeth and think of the money he'll get for enduring this Christmas. Catherine O'Hara isn't too bad either though she's not given much to do with the obvious exception of a hilarious photoshoot that places Udo Kier in the role of quirky photographer. Josh Zuckerman is okay as the morose teenage son, Christina Applegate gets stuck with a lot of the worst moments in the movie due to the fact that she's the daughter and possible . . . . . romantic complication and Jennifer Morrison tries her best to be more than just a plot device.

The story may have originated with Deborah Kaplan and Harry Elfont but at least two other writers are credited with getting the script finished. That becomes more and more apparent as the movie progresses and then hits viewers over the head with a horribly clumsy and unbelievable third act.

Director Mike Mitchell should also shoulder some of the blame but there are times when he hits the easy notes with precision (the soundtrack, early exchanges between Affleck and Gandolfini and a few other decent moments) so maybe it all boiled down to those script problems. After all, his next movie was the very enjoyable Sky High. Oh, what the hell, in 2011 he gave audiences Alvin And The Chipmunks: Chipwrecked so, yes, let's just give him as much blame as the writers. He clearly has no moral compass.

Surviving Christmas is not entirely unenjoyable but it certainly tries hard to be. Casual viewers who flick through their TV channels and find that this is playing over Christmas would be well advised to watch it up to the halfway point and then turn it off before the rot sets in. 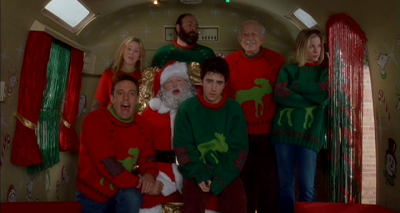