Why do I do it to myself? Well, because, deep down, I love it. I love bad movies almost as much as I love good movies. It's rewarding to watch the end credits roll on a stinker and start sharpening the knives while you ponder just what to type up in review form. And Eight Crazy Nights is a stinker, a movie so misjudged that it becomes almost amusing to watch it limp from one ineffectual scene to another.

There's snow all around, gifts being given to one another and a general feeling of holiday goodwill for most people but this isn't a Christmas movie. Well, actually, it IS a Christmas movie but it's much more predominantly a Hanukkah movie (hence the eight nights of the title, crazy or not).

Adam Sandler plays a number of characters in animated form. His main character is Davey Stone, an alcoholic grump who keeps getting himself in trouble with the law as he rebels against the holiday season. After his latest misadventure he is given a chance to redeem himself if he helps an elderly basketball referee named Whitey (also voiced by Sandler). Whitey is a lovely, generous soul and tries his best to help Davey and to remind him of the cheerful kid that he used to be before something tragic happened. What was that tragedy? Is it an excuse for Davey becoming a complete ass? Will viewers care by the time it is revealed?

The usual group of Sandler alumni are on hand here to add to the unfunny material - Rob Schneider narrates, Kevin Nealon has a role as the mayor, Jon Lovitz has a very small role and there are a number of people involved who also have the surname of Sandler - and so the material is infused with the usual air of something made just for people to get together and fool around while getting paid for it. I don't dislike these individuals every time that I see them but I do dislike when they work together to create such worthless inanity.

Speaking of getting paid, there are also a disgustingly high number of product placements, especially for an animated movie. There are one or two scenes set in a shopping mall that feel like little more than an excuse to  showcase plenty of brand names. Y'know, in case one of them sees the movie and then thinks about throwing the guys a few freebies.

There are unfunny songs, unfunny insults, unfunny moments of toilet humour and some unfunny narration from Schneider. The whole thing has a moral, of course, but it's a moral that is thrown at the audience with no care at all. In fact, everything is simply wrapped up in a rushed and clumsy manner in a way that highlights the way in which nobody involved with this movie seemed to care. In the slightest. The writers - Sandler, Brad Isaacs, Brooks Arthur and Allen Covert - seem to have written out some lines on Post-It notes, screwed them all up, tossed them in a waste bin, added a load of beer and then poured out the resulting sludge and called it a script.

A version of The Hanukkah Song plays over the end credits and that's the highlight of the whole movie, seriously (just watch it here instead to save you any unnecessary pain). At this time of writing, director Seth Kearsley hasn't been at the helm of any other original feature movie. Let's hope things stay that way. 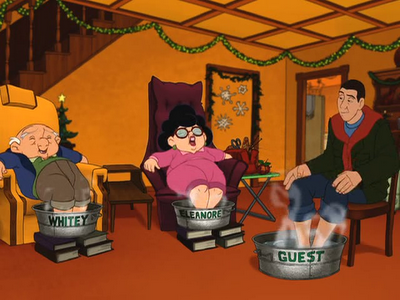