Ahhhh, how I used to love The Munsters. Great personalities, lots of gags (both good and bad) and lovely design throughout from the house itself, 1313 Mockingbird Lane, to each one of the main characters. I don't know what I was expecting from this Christmas special, considering the fact that it was about 30 years after the original series and just how much the world, and my view on it, had changed in those intervening years.

Surprising as it is, The Munsters' Scary Little Christmas gets by and may please fans of the show as it pleased me. I didn't love it and I won't be rushing to rewatch it but I felt comfortable watching it and enjoying the many obvious jokes. Fred Gwynne, the original Herman Munster, is irreplaceable but Sam McMurray tries to do his best by the role.

The story is all about The Munsters getting ready for Christmas. This involves decorating their home, trying to cheer up a morose Eddie and sending out the invites to family and friends. Herman is still scaring people with his appearance, Lily (Ann Magnuson) is still rolling her eyes while keeping her family in line, Grandpa (Sandy Baron) is as troublesome as a pesky child and Marilyn (Elaine Hendrix) is the ugly duckling of the family. Then there's Eddie (Bug Hall), struggling to adjust to life away from his homeland. All of this starts to pale into insignificance, however, when Santa Claus ends up with the Munsters and in need of some serious help.

Written by Ed Ferrara and Kevin Murphy, and directed by Ian Emes, everything here is handled capably enough. I can't really say that The Munsters' Scary Little Christmas is good but it's certainly a lot better than I thought it was going to be. That's thanks to two things. First of all, the tone is quite close to the tone of the old series. Everything is silly and fun as opposed to sharp and cool. Secondly, the cast may not be able to fill the big shoes of the original players but a couple of key players - namely Sandy Baron and Elaine Hendrix - do very well while everyone else involved manages to at least acquit themselves capably enough. There's also a small role for Mary Woronov as a nosey neighbour, which is a bonus for genre fans. Mark Mitchell, Ed Gale and Arturo Gil as Santa and his two elves don't really add much fun to the proceedings but their characters add the required Christmas magic, of course, so their presence is bearable. 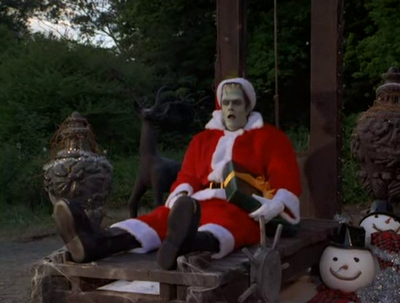