Santa Claus (Douglas Campbell) is a bit fed up in this TV movie. He just feels that people aren't as full of Christmas spirit as they used to be and that the Naughty list keeps getting longer and longer each year. In fact, he wants to just pack it all in and stop providing Christmas to all when so many don't seem to deserve it. His daughter, Kristen (Kathy Ireland), is more optimistic and thinks that those who are still on the Nice list should still get the Christmas due to them. She's so optimistic, in fact, that she makes a bet on it. She bets that she can move any family from the Naughty list onto the Nice list. If that happens then it's all go for another Christmas. Unfortunately, she gets the Morgans, a family who don't seem to have had any Christmas spirit for many years. Can Kristen turn that around?

John Dye plays the inattentive father of the Morgan family while James Kirk and Kirsten Prout play the troublesome children. They all do what is required of them but that's not a hell of a lot. Luckily, the film is lifted every time the lovely Kathy Ireland is onscreen although she's also a bit sugary sweet at times. Indeed, the whole film adds plenty of schmaltz and eye-rolling character developments when it can but that, to me, is a given in many Christmas films. Elsewhere, Rachelle Carson has a small role as a potential new lady for Mr. Morgan and Wayne Thomas Yorke is okay as the uncle who just seems to hang around the house and not teach the kids to behave themselves but Mary Donnelly Haskell is the most fun as Rudolfa Claus, the daughter of Santa who would happily make the most of a chance to make Christmas into something else entirely.

Director Tibor Takacs does nothing to elevate the material here, written by Steven H. Berman, but he at least just goes along with it all and creates a standard fairytale feeling for the whole thing. That's all this is. A princess in disguise finding some commoners and trying to help them without revealing her true identity. If you accept that as soon as the opening titles appear then you won't be surprised by the constant . . . . . . niceness of it all. Nothing edgy or unpredictable here, thank you very much.

Far from essential Christmas viewing, this is a relatively painless TV movie that may keep the family amused for 90 minutes if there's nothing better scheduled at the same time. Mind you, I can't think of any Christmas TV schedule that would let that situation arise. 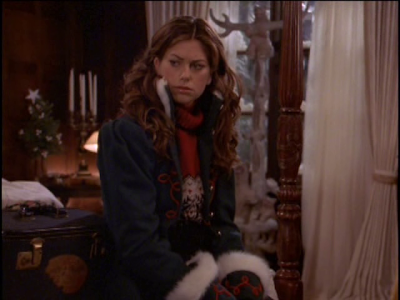