The Nightmare Before Christmas (1993)

AKA Tim Burton's The Nightmare Before Christmas AKA the one that everyone thinks was directed by Tim Burton when it was really Henry Selick who should have got more of the credit.

There's no denying that Tim Burton has his fingerprints all over this, it was developed from an original poem that he wrote when he was a Disney animator in the early 1980s and uses many key players he has used again and again in his movies, but it's important to remind people that Henry Selick really guided this movie through the years that it took to get it on the big screen (while Burton was only present for a number of days).

Lovingly crafted, this is stop motion animation that easily puts itself right alongside the very best examples of the craft. It's full of beautiful little touches, macabre delights in every scene, and while the kids will keep returning to spend time with the strange characters and perhaps sing along with the songs, adults can take in fresh details with every viewing.

The story is all about Jack Skellington (voiced by Chris Sarandon though the singing voice is provided by Danny Elfman), the pumpkin king. Jack is an important resident in Halloweentown but he's starting to lose his enthusiasm for Halloween. That's not good because Halloweentown is all about the holiday, as soon as one is over, the countdown to the next begins. When he discovers Christmas Town, Jack is inspired and re-energised. He decides that Christmas shouldn't be something excluded from the residents of Halloweentown and he immediately plans to put himself in charge of the event for a year. This will mean kidnapping Santa Claus but keeping him safely away from nasty Oogie Boogie (Ken Page), creating toys and flying animals to pull a sleigh and getting a jolly Santa suit made for him by a patchwork ragdoll named Sally (Catherine O'Hara). Sally has a bad feeling about everything but Jack isn't listening.

I almost, ALMOST, class The Nightmare Before Christmas as a perfect movie. The visuals are gorgeous throughout, most of the songs are winners (with the high point being the wonderful "What's This?" although the opening number, "This Is Halloween" really gets everything off to a great start) and the story is a delightful, simple one with good lessons to be learned. The only big mark against it is that the second half of the movie can't keep up the high, high standard set by the first half. The second half is still very good but it has a number of the slightly weaker musical numbers and has to tie everything up as opposed to the pieces being put into place in the first half. In fact, the scenes in which Jack is trying his hand at Christmas are the weakest in the whole film, mainly because the style and design of the film doesn't fit as well with Anytown, USA as it does with the quirky Holiday worlds.

I feel like I'm nitpicking but I'm only highlighting the very small points that stop this from being a solid 10/10 classic. Despite those very minor flaws, I have still watched this film more than almost any other movie in my collection and I can still watch it repeatedly at any point between Halloween and Christmas (the optimum viewing period, of course). If you haven't seen it yet then do yourself a favour and get to it this Christmas. If you have seen it already then you're probably wondering why I rated it "so low". 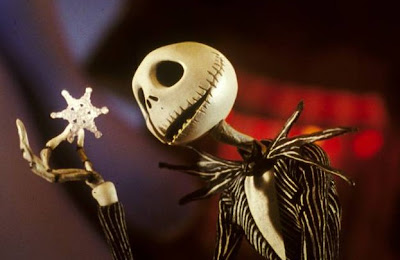