Good ol' Angela Lansbury, she can do just about anything. She spent many years solving murders, of course, in Murder, She Wrote, she was a wonderful granny in The Company Of Wolves and her filmography is dotted with moments of greatness, such as her turn in the original The Manchurian Candidate. And then she has her all-singing, all-dancing Disney standing. Mrs. Santa Claus may not actually be a Disney movie but it certainly feels like one. A bad one, at that.

Lansbury plays the titular character, a woman who has stood behind and supported her husband (played by Charles Durning) for many years, working just as hard to make Christmas what it is while receiving no credit for it. She yearns to travel and have an adventure. So she does. Yes, Mr. Santa Claus takes the reindeer and goes off on a little trip of her own. Unfortunately, one of the reindeer has a bit of trouble which means that Mrs. Santa Claus may have to extend her time away from hubby. As long as she can survive Manhattan and get back before Christmas then everything will still be okay.

Set in the early 1900s, there's just nothing here to make this a worthwhile viewing for anyone but the most undemanding musical fan. Yes, it's a musical. However, the songs by Jerry Herman leave a lot to be desired, I can't think of one that I actually enjoyed and now can't remember any of them (which is a small blessing). That wouldn't be quite so bad if the writing by Mark Saltzman provided some entertainment but it doesn't. Director Terry Hughes takes those negative qualities and somehow makes them worse, populating the movie with a number of poor actors and actresses.

Lansbury is fine in the lead role but she doesn't have the spark that she once had, it's as if she's going through the motions. Her manner is all just too artificial, perhaps simply too sweet in these more cynical times to be believed. Durning isn't onscreen for long but he's fine, as is Michael Jeter (playing an elf named Arvo). The same can't be said for the likes of Debra Wiseman, David Norona, Terrence Mann, Lynsey Bartilson and Bryan Murray, all playing their characters in an annoying and amateurish manner that would look bad even in a particularly cheap episode of Dr. Who (now now, many people love Dr. Who nowadays but you can still tell whenever there's that one episode that didn't get the same budget as the others).

Despite the fact that I hated the movie, I will say that some of the production values were okay and that it's always good to see Lansbury in a role that doesn't have her solving murders while writing books (god, I used to hate that show). I've heard from other people who have thoroughly enjoyed this but I honestly can't figure out how their minds allowed that to happen. Watch it if you like but don't say that you weren't warned. 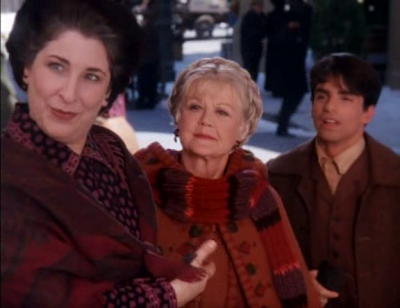