Yule Love It: The Christmas Chronicles (2018)

I was down for this movie as soon as I first heard about it. Kurt Russell as Santa Claus, that was all I needed to hear. Sold.

The Christmas Chronicles tells the story of two siblings, Kate (Darby Camp) and Teddy (Judah Lewis), who are facing their first Christmas since the death of their father. Teddy has been keeping himself busy with friends, stealing cars for joyrides, while younger Kate remains naïvely optimistic that everyone can get their wishes from Santa. When their mother (Kimberley Williams-Paisley) has to head out to work on Christmas Eve, Kate convinces Teddy to keep her company as she stays up all night, determined to videotape evidence of Santa. They eventually get their evidence. In fact, they stow themselves in the back of Santa's sleigh, eventually causing a crash that sees Santa losing his magic hat and potentially losing out on the chance to make Christmas happen for lots of children who will lose the Christmas spirit.

Written by Matt Lieberman, from a story created with David Guggenheim, this is a solid attempt to create yet another Santa mythos for the modern age. You have the magic hat, you get some helpful little elves (depicted with poor CGI, although I am sure that kids will still enjoy seeing them), and you get a Santa who both embodies the traditional look while also complaining about how he's always depicted as being a fat guy who says "ho ho ho". It doesn't all work, but the bits that do make up for the bits that don't.

Director Clay Kaytis only has one other directorial credit (the middling movie version of Angry Birds) but has a solid background in animation that stretches beyond that. He doesn't do a bad job, all in all, and it's not really the kind of material that lets anyone put their stamp on things, aside from Russell. This is a Christmas movie, but it's also very much a star vehicle, and it often works better in the latter form than it does in the former. Let's face it, we have plenty of Christmas movies to choose from. But none of those star Kurt Russell.

As for the cast, did I mention the big plus of having Russell as Santa? Whether he's talking with naive candour to people who are never going to believe his story or jamming in a jail cell with members of the E Street Band, Russell is clearly having a lot of fun onscreen, and that comes over to viewers. Camp is okay as the young girl, Lewis has a harder job portraying the sullen teen who has got himself on the naughty list (of course), and Williams-Paisley is just there to bookend the film with scenes of family time during the holiday season. And there's a fun, if predictable, cameo at the end of the film.

Is this a great film? No. Is it one you may well end up watching more than once, and perhaps use as a new seasonal standby in between some of your more established classics? It just might be. Especially if you have kids who need a big playlist while they impatiently await the arrival of Christmas Day itself.

Here's a great selection of Christmassy movies for the family to enjoy.
Americans can get it here. 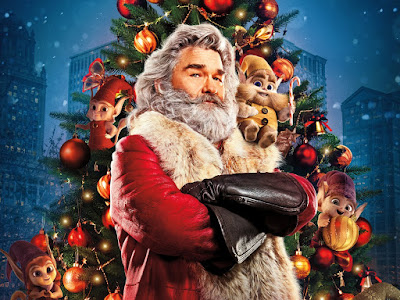