Yule Love It: A Christmas Prince: The Royal Wedding (2018)

Rose McIver returns to play Amber in this Christmassy sequel to the Christmassy Netflix film from last year, and you probably won't be surprised to find that it is just as comfortable and enjoyable as the first film. One of the co-writers (Nathan Atkins) returns, and the new director (John Schultz) at the helm obviously knows what is wanted from him.

It's a year on from the events in the first film, funnily enough, and Amber is travelling back to the land of Madeupcountrydonia to marry Prince Richard (Ben Lamb). She takes her father  (John Guerrasio) along with her, and immediately starts to butt heads with the traditional Mrs Averill (Sarah Douglas), who believes that Amber shouldn't be able to do anything that is different from what has been done for hundreds of years before her arrival. On top of that, Amber feels her own wedding getting out of her control, as she tries not to upset the royal family while resenting being pushed around and controlled by an impatient wedding planner (played by Raj Bajaj). Oh, there's also the fact that the national economy seems to be tanking for some reason, putting even more stress on Prince Richard while Amber grows frustrated by her exclusion in a matter she feels she may be able to help with.

As well as those already mentioned, you also get the return of Alice Krige (Queen Helena), Honor Kneafsey (Princess Emily), Theo Devaney (Simon, who may wish to atone for his previous transgressions or may be scheming once again), and more. The band is back together, as it were, and they're happy to play the favourite tunes that the crowd came to hear. McIver helps immensely once again, being a very likeable lead. As much as I enjoy seeing her in anything, including these movies, I'd love to see her in a big theatrical release some time in the near future (hell, if Veronica Mars can get a movie then why not iZombie?).

Schultz does just fine, joining the ranks of the many people who direct these films without putting any fuss or variation from the accepted standards. Atkins stays true to the main characters with his script, thankfully, and throws in the required obstacles to everlasting happiness without making anything too complicated. He doesn't do as well with the comedic elements, mainly involving Guerrasio and/or Bajaj, but everything moves along pleasantly enough.

Of course it's something that many will sneer at, just as so many people sneered at the first film, but if you enjoyed that one then you're going to enjoy this. It tells a new story while sticking closely to the feeling and tone of the first film, because everyone likes what they're familiar with (despite the protests of some).

Here's a different royal-themed Christmas movie.
And here are those animated classics again. 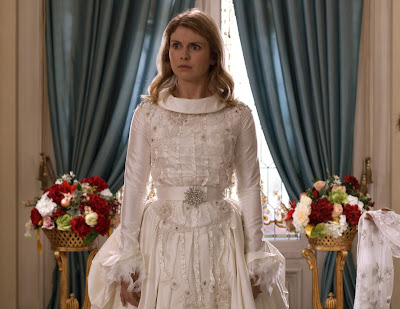