I can't apologise enough for not remembering who said this, but before seeing Amour I'd seen someone describe it as: "remember the first 5 minutes of Up? Well, imagine that for two hours."

That description is spot on, but it's also a little off-putting. I know that I had the rental disc sitting beside my player for almost a fortnight before I finally decided to stick it on and see whether or not I would be crying by the time the end credits rolled.

Amour is a simple character study, a sombre and sobering look at old age and the horrible tricks that mother nature can pull on people struggling to retain their independence and dignity. It IS moving, but it's also as unsentimental and powerful as you would expect a Heneke movie to be.

Jean-Louis Trintignant and Emmanuelle Riva (who received a deserved Oscar nomination for her fantastic performance) play, respectively, Georges and Anne, a married couple in their eighties. They have a nice life, a nice home and remain quite active, and they still have lots of love for each other. Unfortunately, Anne has an "episode" one day and ends up hospitalised. When she gets home again, some time later, she makes Georges promise her that hospitals won't figure in her future. She wants to stay at home, no matter what. Georges agrees, perhaps not quite aware of just how difficult things will get.

While the film also includes decent supporting turns from Isabelle Huppert, concert pianist Alexandre Tharaud, William Shimell and a few others, it feels very much like a two-hander between Trintignant and Riva. The two stars do a fantastic job from start to finish, even in the moments when the struggles become too much for them and they let out their frustration in regretful ways.

The script takes a back seat to the performances most of the time, but when it comes to the fore it contains some beautiful passages (mainly spoken by Trintignant, for whom it was written). This works in line with the cinematography and direction, which seems plain and uncluttered but shows occasional moments of beauty in even the bleaker sequences.

I've seen about three or four films from Michael Haneke, but I've loved all of them. I think that it's about time I tracked down his entire filmography and worked my way through it. After all, I'm not getting any younger. 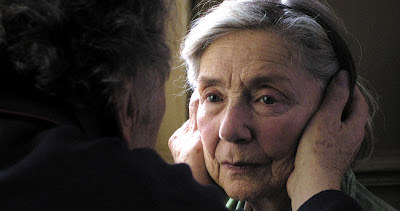