Written and directed by John Hughes, this is a typical . . . . . . . John Hughes movie. But despite so many people having fond memories of it, thanks to the presence of the wonderful John Candy, it's not his best.

Candy plays the titular uncle, a man called upon to look after his nieces and nephew when his brother finds himself in a bind and with nobody else to turn to. Uncle Buck proceeds to cause a small amount of mayhem while doing his best to look after the kids, finding himself particularly messing up in his dealings with moody teenager Tia (Jean Louisa Kelly). This leads him to consider just where he is in his own life and just how he has been dealing with his own relationship (with Chanice, played by Amy Madigan).

Clocking in at just over an hour and a half, full of lively soundtrack moments and conversations that you would never really hear outside of John Hughes movies, this is an easy movie to enjoy. In fact, I've only ever met one person who couldn't stand it and that person is my wife (who is weird anyway . . . . . . . hence the fact that I was able to get her to marry me).

Candy is great in the main role, Jean Louisa Kelly does fine as the moody teenager causing him so much strife, Macaulay Culkin is very funny in one of his first major roles and so is Gaby Hoffmann. Amy Madigan does well as the woman who despairs of Buck while remaining in love with him, Laurie Metcalf steals a couple of scenes and Jay Underwood gets to be the young man, named "Bug", spending far too much time with Tia in an attempt to move the relationship along as quickly as possible (as Buck well knows).

There are many moments here that I enjoy - Candy being quizzed by Culkin, the killer line delivered to a shocked Suzanne Shepherd (playing a teacher trying to instil better behaviour in her young charges), every time Candy is unsubtly warning off Underwood - but, for some reason, the film just doesn't come together for me in a way that it does for many others. I can watch it from start to finish without being bored, but it's one I don't have to rush to ever watch again. 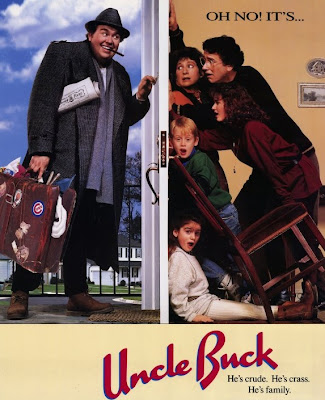