I don't like Keith Lemon. In fact, I don't like any of the characters that have been created by Leigh Francis. So it's only fair to state that right up front. "But why did you even watch the film?" people will ask. Well, I never make my mind up until the end credits roll. Of course, I knew I wouldn't be the target demographic for this movie, but I also wasn't the target demographic for many other movies that I have watched and ended up enjoying. There was a chance that I would enjoy Keith Lemon: The Film.

I didn't. But there WAS a chance.

I'm sure that most fans of the character will rate this as at least a solid 7/10 movie, okay, so those people can skip the rest of my review and head off to the sun-kissed land in which Keith Lemon is funny and lots of other things go on that I just don't understand.

In fact, the movie is so depressing that I'm not doing a full review. What I'm going to do is very briefly describe the premise and then simply list every "celebrity" cameo that I can recall and leave others to judge.

Keith Lemon dreams of the big time, of course. It looks like it will never happen, despite the support of his lovely girlfriend (Rosie, played by Laura Aikman) and his friend Duncan (Kevin Bishop, a man as painfully unfunny as Leigh Francis, but also without any of the strange likability that Francis has . . . . . . . . strangely, I don't like the comedy that Francis provides but I like the sweet core hidden beneath the stupidity and crudity). Things turn around, however, when he meets Archimedes (Verne Troyer). Archimedes can fix things, and it's not long until Keith Lemon has wowed everyone with The Lemon Phone, The Keith Lemon Phone. He has lots and lots of money, lots and lots of time with Kelly Brook (played by Kelly Brook, putting on a brave face while involved in many of the worst moments) and no care for those who stood by him before he made the big time.

Written by Francis and director Paul Angunawela, I will admit that the obvious digs at Apple were pretty amusing (Keith finds himself with a phone that nobody is interested in, until he sticks a lemon on it). It's just a shame that the potential inherent in that approach to the material was ignored for a mix of catchphrases, horrible gags based around sex and euphemisms and cameo appearance after cameo appearance from z-list celebrities who I don't really enjoy seeing on TV, let along in movies.

So . . . . let's list off those names/faces I can recall (despite trying to forget) and wrap this thing up, eh.


If you read that list and spent most of your time saying "WHO?" then that is the correct response. Hopefully, that's what everyone will be saying when, a few years from now, they hear the name Keith Lemon. 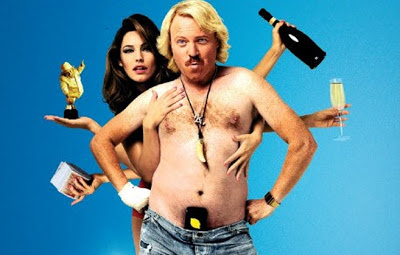