The boys are back, and this time they're going to Hell. The original title of this film was, in fact, originally going to be "Bill & Ted Go To Hell" but, apparently, many Americans are put off by anything that uses the word Hell so that was changed. Thankfully, most of what made the first film so enjoyable was kept the same.

Alex Winter and Keanu Reeves reprise their main roles as, respectively, Bill S. Preston Esq. and Ted Theodore Logan. This time the future is jeopardised by the wicked De Nomolos (Joss Ackland), a man who has had enough of people being excellent to each other and enjoying rock 'n' roll music. He decides to crash the party in spectacular fashion, by using the time-travelling phonebox to send back evil robot versions of the boys, killing the real pair and then ruining their lives and musical career. It's a cunning plan, and one that looks as if it will work when Bill and Ted are killed off pretty quickly. But death doesn't have to be the end.

It may be a new director at the helm in the shape of Peter Hewitt, but writers Chris Matheson and Ed Solomon (whose name is reversed for the name of the villain) are back and clearly out to do their best for two characters embraced so readily by audiences the first time around.

Winter and Reeves slip back into their roles as easily as any of their casual clothing. They have some fun playing the bad robots, but always seem more at ease being the optimistic, naive, good guys. Rufus (played by George Carlin) returns, as do the princesses from the first film, although they are now played by Annette Azcuy and Sarah Trigger and they have slightly more screentime. Great support comes from Amy Stock-Poynton, Chelcie Ross, Pam Grier and many others (including Hal Landon Jr. and Roy Brocksmith, two men who at one point have to bravely attempt to act as if their bodies have been inhabited by the spirits of our leading dudes). But the highlight of the movie is William Sadler, hilariously deadpan - no pun intended - in the role of the Grim Reaper. The film moves along nicely before he appears, but as soon as his character starts to interact with Bill and Ted the whole thing is lifted slightly, putting it on a par with the first film.

People expecting more time travel shenanigans may be slightly disappointed, but the main premise IS based on altering timelines and the finale has some fun with the familiar phonebox. There are lots of great characters, all of them in the shadow of the Grim Reaper (suitably enough, I suppose), and a rousing rock song or two on the soundtrack, including the mighty God Gave Rock 'N' Roll To You. If you enjoyed the first movie then you'll enjoy this movie. 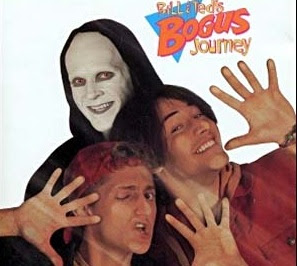