The internet has brought us all closer together in ways that could hardly have been imagined decades ago. With the help of blog chat, Twitter and, of course, Facebook I now have hundreds of friends I really do count as friends (having met them in person or not). I'm also in touch with lots of people I like, even if we're not close friends. People who keep things interesting, people who put themselves over well, people I like having in my ether-based social circle. Of course, a lot of those people have various projects that they are involved with and things get potentially awkward when our paths cross in a semi-professional capacity. I have to stay honest, without being rude (I hope), while the person who helped make whatever I am reviewing may like what I have to say or, indeed, loathe it. Matt Farnsworth is one of those people, and I had been aiming to see his movie, The Orphan Killer, for a long time. Unfortunately, I didn't like it.

The story is simple. David Backus plays the titular killer, a man determined to pursue and destroy his sister (Diane Foster) because when they were both orphaned at a young age she was adopted and he wasn't. That's really all there is to it. The Orphan Killer kills some people, wanders around, toys with his sister for quite some time and spouts lines of dialogue that make you think he really just wants to be adopted up by a passing gang of cenobites.

I'm not going to say that The Orphan Killer is unwatchable. If you love some extreme gore then there are a few moments here that are genuinely impressive in how nasty things get. The practical effects are fantastic and worthy of praise. In fact, even the mask worn by the killer is a fine piece of work. It's just a shame that nothing else in the movie matches these moments, leaving it as a film JUST for easily satisfied gorehounds.

Written and directed by Farnsworth, who also has a role in the film, there are too many amateur errors that pile up to make this a more difficult viewing experience than it should be. That's not to say that he can't/won't learn and do better with his next film, but I'm not going to "blow smoke up his ass" on this occasion.

First of all, the sound mix is awful. I don't know if there was a problem with my rental download, but the audio was so distorted that I had to lower the volume to a ridiculously low level just to make out what was being said. That didn't matter whenever some metal music was blaring on the soundtrack, which was for almost every minute of the movie (including an enjoyable cover version of "Cry Little Sister").

Then the geography of the movie was far too random and non-cohesive. The main setting was an abandoned area behind a church that had a dance studio/hall at the back and a few corridors that looked like a school. These MIGHT all be in the same building, but it always feels like there are three very different buildings being used with poor editing choices and a lack of unifying production design.

Third, we have the old problem of a killer able to murder-death-kill people in the blink of an eye then going on to take an absolute age when it comes to "the final girl". Seriously, this guy suddenly gets so chatty and stilted that he should consider returning as a James Bond villain. And a lot of the religious talk feels almost laughable, it's someone trying to add weightiness to a character that didn't even have to speak in the first place.

The acting from Backus and Foster is decent enough, and the cast also includes James McCaffrey, John Savage and Karen Young, but it's overwhelmed by the many other poor choices that add up to spoil the movie.

The central concept is a goodie, and the backstory is nicely laid out throughout the movie. I hope that Matt can rework some similar ideas into a future movie and really show his work at its best, but I fear that the people already praising this film too highly will stop that from happening. 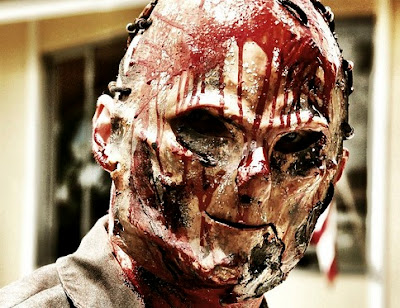