An action comedy that puts laid back Owen Wilson alongside fast-talking Eddie Murphy should be fairly enjoyable, right? Well, I Spy IS fairly enjoyable. It's just, sadly, not much more than that. And be warned, fans of the old TV series will find very little connection to it beyond the title.

Wilson is a U.S. government agent named Alex, and his latest mission is to find a top secret jet that can be rendered practically invisible. It has been stolen and will be sold to the higthest bidder, which will probably be someone who wants to use it as a highly effective bomb delivery system. To get close to the man (Malcolm McDowell) most likely to have the jet, Alex has to work alongside a civilian, a cocky boxer named Kelly Robinson, who doesn't like to be told what to do. Can the pair manage to get along long enough to complete the mission?

Director Betty Thomas, who has at least three much better movies in her past filmography (Doctor Dolittle, Private Parts and The Brady Bunch Movie), does competent enough work, but the movie is really undermined by the writing. Four people worked together on this screenplay, so I guess it's a limited success that they at least managed to contribute one laugh each.

Murphy may not be on top form, but he doesn't do a bad job. Owen Wilson also doesn't do a bad job, necessarily. It's just a shame that Wilson has somehow overplayed his schtick more than Murphy, as hard to believe as that is. McDowell does fine in the standard bad guy role, Famke Janssen is always a welcome addition to any cast, in my view, and Gary Cole occasionally swoops in to steal the movie as Carlos, the agent who actually looks and acts like someone who could be entrusted with top secret missions full of danger.

There are better buddy action comedies (I could name a dozen off the top of my head), there are better spy comedies (Get Smart is one of the best) and there are better movies you could pick starring any of the leads or supporting players. That doesn't necessarily mean that I Spy is a BAD film. It creeps just above average, but it should never be your top priority. 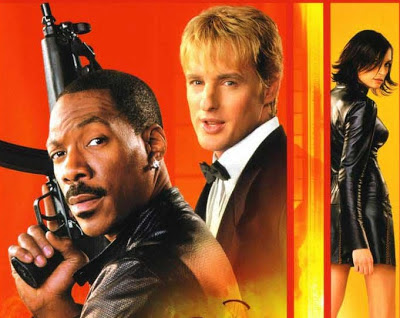