The classic tale of Little Red Riding Hood gets twisted to good comedic effect in this animated movie, written and directed by Cory and Todd Edwards (with some assistance from Tony Leech in the writing department).

The film begins with 'Red' (Anne Hathaway) visiting her granny (Glenn Close), only to find that it's a wolf (Patrick Warburton) trying to pass himself off as the grey-haired relative. Then a screaming woodsman (James Belushi) smashes his way into the cottage. The whole situation is one big mess. Although it would seem that the wolf is the main baddie, Nicky Flippers (David Ogden Stiers) is determined to unravel the whole thing and hear the different tales from everyone in order to get to the truth.

Despite the rather crude animation style (well, it's not awful but it's no PIXAR), Hoodwinked does enough to make for an entertaining viewing. The twisted fairy tale may have been played out over the past decade or so, but it can still be fun, especially when made into the form of a whodunnit.

The voice cast all do a good job (I could listen to Patrick Warburton read a phone book and I'd be laughing my ass off), and as well as the main players already mentioned there are roles for Andy Dick, Anthony Anderson, Xzibit and Chazz Palminteri, but the script never feels quite sharp or funny enough to make the most of them.

Of course, Hoodwinked! is aimed at kids and it does a lot right for the target demographic. The bright colours and larger than life characters all appeal (especially a mountain goat cursed to sing constantly instead of talk), everything is cute without being too sickly and there are plenty of easy laughs.

It's not that Hoodwinked! is bad, it's just not great. It's not that clever, it's not hilarious and it's not as technically polished as twenty other animated movies I could name off the top of my head. But stick the DVD on and the little ones will be happy from start to finish, which means that it has succeeded in its main aim. 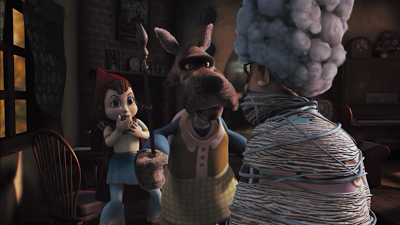