It may not be the worst horror movie ever released by Hammer but this is certainly one of their weaker efforts, albeit one that still just about manages to entertain for most of its runtime thanks to some amusing overacting and a nice juxtaposition of the possibility of evil deeds being planned/happening alongside a quaint, rural and very British village community.

Joan Fontaine stars as Gwen Mayfield, a teacher who has recovered from severe personal trauma (and breakdown) after a spell in Africa saw her caught up amidst a revolt from the locals led by their witch doctor. All seems well when she is given a position in a small, English village, but it's not long before she suspects that things are far more sinister below the surface and that some of her young charges may very well be in some danger. Is there any truth to this or is it just the product of an overactive, already broken, mind?

While the movie (adapted from the Norah Lofts AKA Peter Curtis novel by Nigel Kneale, who has managed far better writing elsewhere) is fairly enjoyable when building a tense atmosphere of paranoia and mistrust around Fontaine's character, it simply teeters over to ridiculousness far too quickly. Things are not helped by the level of acting displayed by everyone involved. Fontaine is all big hair and eye-rolling nervousness, Kay Walsh is far too polite and proper to even be interesting, Alec McCowen doesn't have a lot to do and everyone else is either as hammy as a ham sandwich made by Hammy The Hamster while he wears his West Ham scarf (step forward . . . Gwen Ffrangcon Davies) or far too stilted and caught up in the old-fashioned acting style of . . . . . . . well, just standing in the right spot and making sure that the pronunciation is perfect. Martin Stephens and Ingrid Boulting (billed here as Ingrid Brett) play the two main youngsters who may be in danger, and they at least have youth and relative inexperience to excuse any failings.

Director Cyril Frankel shows no real competence here, and the final reel is quite a damp squib considering the build up towards it. The Wicker Man this ain't. In fact, taken as a comedy it may work thanks to some terrible, stereotypical "am-dram" interpretive dance moves during a finale as laughable as it is uninvolving.

Coincidentally, fans of UK TV comedy should keep their eyes peeled for Michele Dotrice and Leonard Rossiter in small roles.

Disappointing as a straight horror, but entertaining enough for a number of wrong reasons. 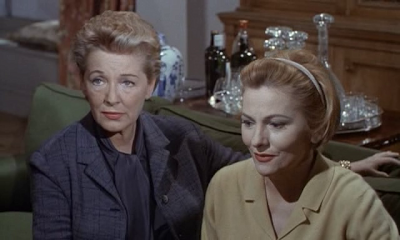